Show Jumping Competitions are among the most popular and best attended equestrian events.

Since the first major show jumping competitions were held in England during the Horse of the Year Show at Olympia in 1907, a variety of competitions and events have been developed that test both the show jumping horse and the rider.

Especially since it was first incorporated into the Olympic Games in 1912, and the sport has grown in popularity ever since.

The biggest rise in its popularity came when it was accepted as a spectator sport that could be viewed on television.

The various types of Show jumping Competitions include : 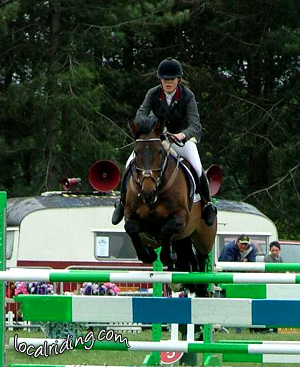 The Grand Prix is the highest level of show jumping. Run under FEI rules, the horse jumps a course of 10-16 obstacles.

It is designed to test the stamina, precision, power, and control of both horse and rider.

The courses usually include tight twists and turns, very high and colorful fences designed to test those riding it. It takes a great amount of training and conditioning to get both horse and rider prepared for such an event.

The first steeplechase is rumoured to have been the result of a wager in 1752, between Mr. Cornelius O’Callaghan and Mr. Edmund Blake, racing four miles cross-country from Buttevant Church to St. Leger Church in Doneraile, in Cork, Ireland.

An account of the race is believed to have been in the library of the O’Brien’s of Dromoland Castle.

Most of the earlier steeplechases were run across country rather than on a track and resembled English cross country as it exists today.

The first recorded steeplechase over a prepared track with fences was run at Bedlam, in the UK in 1810. The famous Grand National was established in Liverpool, England in 1837.

The ever popular Puissance Showjumping Competition …

Puissance is the high-jump competition in the equestrian sport of show jumping. It consists of a short course of fences, ending in the final puissance wall. After the completion of the course, the horse and rider pairs that went clear move on to the next round, where the puissance is raised. As the competition goes on, the jump is built increasingly higher until only one horse clears the wall. 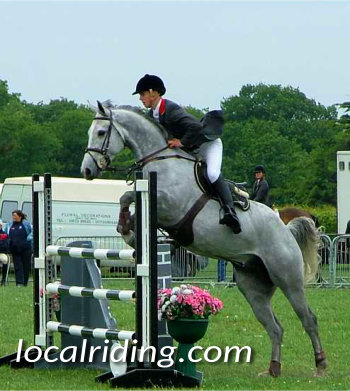 The puissance wall may get taller than 7 feet. The current record stands at 8 ft. 1¼ in. (2.47 m), and was achieved by Alberto Larraguibel riding Huaso, at Viña del Mar, Chile on 1949.

Horse and rider jump six fences set in a straight line. In most places, fences are placed at equal distances apart, the first fence is the lowest and each subsequent fence is higher than the one before.

Horses are either penalized or eliminated from competition if they knock down a rail.

After each round where more than one competitor goes "clear," or is tied for fewest faults, the six fences are raised in height for each subsequent round until there is a winner.

Occasionally, if there are multiple jump-offs, the final fences can be raised to well over 6 feet.

An event where exhibitors choose their own course, with each fence cleared worth a given amount of points based on difficulty. The entry who accumulates the most points within a set time limit on course is the winner.

A showjumping event where spectators bet on which horse will win by means of an auction where the highest bidder has the exclusive bet on a given horse.

Though the exact mechanism varies by region and culture, as a rule, the spectator who bets on the winner collects all the money won on the bet and then splits the purse with the owner of the winning horse.

Jumping classes limited to horses with fewer than one, three or six wins. Fences are usually lower and time limits more generous.