Your DIY Dressage Arena layout can be put together quickly and accurately in the middle of a field for a riding club competition. It can be a real pain if you are doing it by yourself or if there are only two of you.

But, by spending as little as £20 you can create your own DIY Dressge Arena layout quickly and accurately every time, even if you’re working alone.

Here’s how to layout your DIY Dressage Arena …

Inexpensive open reel surveyors tapes are readily available in lengths of 20, 30, 50 & 100 metres. You will need two 50mtr reels. You can pick them up for as little as £9-10 including postage. 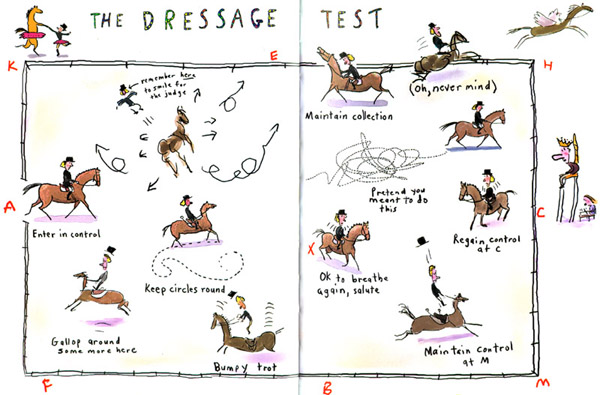 You will also need four tent pegs or dressage board pegs if you already have them.

If you are using dressage boards for your diy dressage arena layout you will need :

Step 1. Starting at the judges end of your intended HEK long side, peg down the loop of surveyors tape 1 and reel it out 40m. Make sure the tape is straight by gently pulling it, but DON’T pull it too tight or the tape might break at the pegged down end. 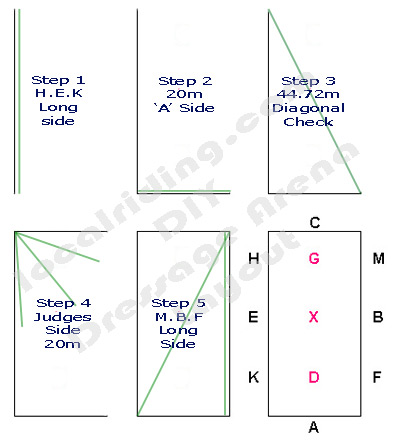 Step 2. Take the second tape to measure the short side and peg it at the 40m mark on the first tape, your second corner.

Pull it out 20m along the rough line of the short entrance side A. Dont put the boards down yet.

With both tapes still laid out, set out the entrance short end with two boards outside the line of the tape about 2 to 2.5m apart for the entrance (A) and lay out a board at each of the corners.

Step 4. Still with the ends of both tapes pegged down, wind tape 1 in to 20m and swing it round to roughly lay out the judges short 20m end.

Pull tape 2 out to 44.72m and swing it round to meet tape 1 exactly at its 20m mark at your last corner. Mark the corner with a peg.

Layout out the judges end outside the line of the tape with board in the centre, letter (C) at the centre and one board at each corner.

Step 5. Take up any one of the tapes and lay it down the last long side and it should be 40m. If you have done it properly you should be no more than 0.5m out. If it is much more than that you might have to make some adjustments.

Step 6. Finally … Make sure you pull up the four tent pegs from the grass and definitely dont leave until you have found them. You DO NOT want to risk leaving them for a horse to step on, or have a mower run over them.

It sounds a little complicated on paper but when you’ve done it once or twice, you’ll realise just how easy and accurate, it is.

If you hold regular dressage competitions at your riding club or livery yard it’s well worth the ?20 you spend on the two 50m tapes.

A couple of things to remember …

In windy weather the tapes can blow about and you will lose accuracy. If it’s windy get someone to help and be gentle with the tapes.

Handy tip … write 44.72m on each tape reel with a permanent marker so you never forget the length of the diagonal