Steffen Peters on Ravel, Isabell Werth on Satchmo and Anky van Grunsven on Salinero will head up an all-star cast at the Exquis World Dressage Masters in Palm Beach next month that kicks off a second year of the globe’s richest lineup of dressage events.

The CDI5* event on Feb. 4-6 will be the first meeting of the three top combinations since the German and Dutch women were runners up to Steffen and Ravel at the World Cup in Las Vegas last April.

Other top combinations are: 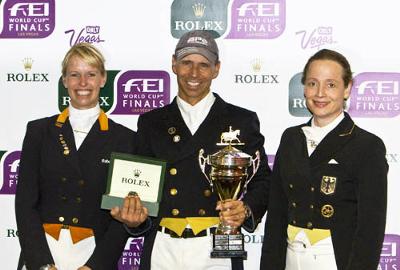 The Netherlands — Stephanie Peters and Christa Laarakkers and Ovation;

Other riders may qualify through a CDI3* a week before the event, or receive an invitation.

Tickets will go on sale at noon Monday, at www.equestriansport.com.

The World Dressage Masters at the Palm Beach International Equestrian Center is the first of at least three of the globe’s richest dressage events held in the U.S. and Europe in 2010. A fourth venue is likely to be added.

Anky and Isabell have won a combined total of 11 World Cup titles and eight Olympic gold medals in the 15 years they have dominated global dressage. Anky won the inaugural Palm Beach Masters in 2009 and at Cannes on the French Riviera in June, while Isabell captured the World Dressage Masters in Munich in May.

Steffen Peters beat both riders in the 2009 World Cup Final at Las Vegas then went on to make an historic sweep of all three team championship competitions–the Grand Prix, Grand Prix Special and Grand Prix Kür–at the World Equestrian Festival in Aachen, Germany. Those successes led to Steffen being named U.S. Equestrian of the Year for the second straight year and for Ravel being named Horse of the Year.

Anky lives in Erp, The Netherlands, and is married to the Dutch national coach, Sjef Janssen. They have two children.

She returned to competition the week after Christmas after a six-month break during which she gave birth to a baby boy, Frederik.

Despite the long break, she had accumulated so many points in six months of competition that she entered 2010 with both Satchmo and her other top horse, Warum Nicht FRH, in the top 10 in the FEI World Rankings that spans a year of shows.

The World Dressage Masters is a sports and marketing initiative of equestrian innovator Exquis, international sports marketing agency, SportBizz, and Equestrian Sport Productions of the USA.

WDM utilizes marketing strategies and innovation to enhance the sport of dressage worldwide and is sponsored by Exquis, Moorland Stables and Moorland Investments, Nürnberger Versicherungsgruppe and Jerich International.