Once infected with strangles your horse will appear depressed, dull and will stop eating.

The strangles bacterium enters the horse’s lymph glands through the respiratory tract and often rests in the guttural pouch. The lymph nodes can eventually swell, rupture and spread the strangles bacteria into the surrounding area.

As a horse owner, knowing what to look for or how to spot the symptoms is crucial to your horses welfare.

The Symptoms of Strangles in Horses’ Can include:

Inflammation of the lymph nodes

After a few days the lymph nodes around the throat swell, forming abscesses

If left untreated the lymph node abscesses will usually burst and drain but in extreme cases the abscess can become so large they can crush the windpipe and result in strangulation of the horse. 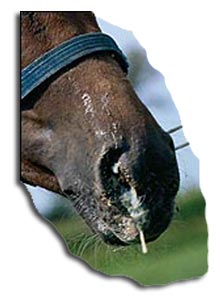 A nasal discharge appears and is initially clear but then becomes purulent (thick with signs of pus), after the abscesses have ruptured in the nasal passages.

Abscesses that rupture shed highly infective pus into the environment, which can infect other horses.

The main and often fatal complications of strangles are:

Which describes the spread of infection to unusual sites within the body other than the lymph nodes draining the throat. For example; abdominal or lung lymph nodes may develop abscesses and rupture, sometimes weeks or longer after the infection seems to have resolved. A brain abscess may rupture causing sudden death or a retropharyngeal lymph node abscess may burst in the throat and the pus will be inhaled into the lung.

Is an immune-mediated acute inflammation of peripheral blood vessels that occurs within 4 weeks of strangles, and while the animal is convalescing. It results from the formation of immune complexes between the horses antibodies and bacterial components. These immune complexes become trapped in capillaries where they cause inflammation, visible in the mucous membranes as pinpoint haemorrhages. These haemorrhages lead to a widespread severe edema of the head, limbs, and other parts of the body. Purpura can also be a complication of routine vaccination 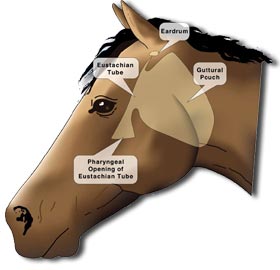 Inflammation of heart muscle, which may follow strangles in a small proportion of horses. An electrocardiogram (ECG) can determine that a horse can return to heavy work or to training after an episode of strangles.

Involves paralysis of the throat muscles. It is commonly referred to as roaring. The condition may follow abscessation of cervical lymph
nodes. (see equine respiratory system).

Filled with pus, which may be concurrent with classic strangles, or follow in the immediate convalescent period. The two guttural pouches are large mucous sacs; each is a ventral diverticulum of the Eustachian tube. They are present only in Equidae and are situated between the base of the cranium dorsally and the pharynx ventrally. They open into the nasal pharynx and each has a capacity of about 300 mL.

Persistent infection in the guttural pouch may lead to inspissation (drying) of pus and, in some cases, the formation of a solid, stone-like, concretion called a chondroid.

Horses’ that develop a persistent infection of the guttural pouches become the carriers, the major source of infection to spark outbreaks in susceptible horses with which they mix.

The strangles bacterium enters the lymph glands via the respiratory tract and can find harbour in the guttural pouch. The lymph nodes swell and can rupture, shedding the bacteria into the environment.

NOTE: It is thought that the equine strangles bacteria can survive in water for at least four weeks, and for up to eight weeks on tack or wood.