The Equestrian Sport of Show jumping is a ridden sport included in equestrian eventing and in competitions of its own. It is probably the most popular equestrian sport.

Show jumping is a relatively new equestrian sport and was a development of cross country jumping, which was initially called Lepping and brought indoors to allow spectators to view all the jumps without walking across muddy fields.

Until the Enclosures Acts which came into force in England in the eighteenth century there had been no need for a horse to jump fences as there were no fenced fields.

This act of parliament brought new challenges for the followers of fox hounds.

The enclosures act brought fencing and boundaries to many parts of the country, as common land was dispersed amongst the wealthy landowners.

During early showjumping competitions held in France, competitors would take off across country for the jumping.

This was rather unpopular with spectators as they could not see all the jumps. So shortly afterwards fences started to appear in the arena and this became known as ‘Lepping’. 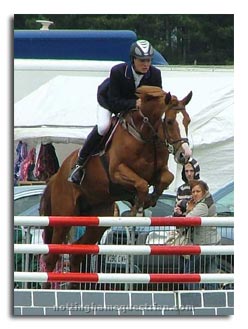 Fifteen years later, ‘Lepping’ competitions came to Britain and by 1900 most of the more important shows had ‘Lepping’ classes.

Although these rarely attracted more than 20 competitors. The ladies, who rode side-saddle at the time, had their own classes.

This style was more secure for the rider, but this impeded the freedom and movement that the jumping horse needed, to use its body to clear large obstacles.

The old show jumping seat involved the rider using long stirrups, keeping the legs pushed out in front and the body leaning back. The rider then pulled the reins, as the horse took the fence.

As Lepping developed, the principle cavalry schools of Europe at Pinerolo and Tor-di-Quinto in Italy, as well as the French school in Saumur and the Spanish school in Vienna all preferred to use a very deep seat with long stirrups while jumping.

This position was adopted as they believed that the hindquarters and hocks were more flexible and better shock absorbers than the fragile front legs.

By leaning back and pulling the horse’s head up, the rider would try to encourage the horse to land hind legs first (or at least with all four legs), to reduce the impact on the front legs.

This position had extreme problems, as the horse was uncomfortable being hit in the mouth over every obstacle.

The position also kept the rider’s weight directly on the back of the horse, and pushed the rider behind the motion, sending his centre of gravity behind the horse’s.

The weight on the horse’s back, in addition to the upward pull on the head, made it impossible for the horse to round up in a natural bascule over the fence.

The rider interfered with the horse’s jumping movement, making it more difficult (and sometimes painful) for the animal to clear the obstacle, and put a great many horses off jumping

Then, the Italian Instructor Captain Frederico Caprilli set his mark on the world of showjumping. 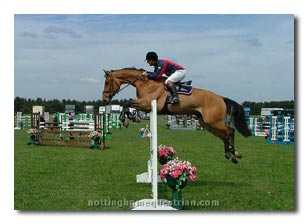 Caprilli set out his idea that a forward position with shorter stirrups would not impede the horses balance over the obstacle. This style is now known as the forward seat, and is the accepted style used today.

However, the deep dressage seat, is useful for riding on the flat and in conditions where control of the horse is more important than freedom of movement. This is referred to as a backward seat within jumping circles.

The first major show jumping competition held in England was during the Horse of the Year Show at Olympia in 1907, with most competitors being members of the military.

It quickly became clear to HOYS and other competition organisers, that there were no clearly defined rules for the sport.

Prior to 1907; there were no penalties for a refusal and the competitor was sometimes asked to miss the fence to keep the audience happy.

The first show jumping courses were built with little imagination; many with only a straight bar fence and a water jump.

Then in 1923 a meeting was organised to rectify the problem and this led to the formation of the BSJA in 1925.

In the United States, a similar need for national rules for jumping and other equestrian activities led to the formation in 1917, of the American Horse Shows Association, now the United States Equestrian Federation (USEF).

Showjumping achieved real international acclaim when it was first incorporated into the Olympic Games in 1912 and has grown in popularity ever since. The biggest rise in its popularity came when it was accepted as a spectator sport that could be viewed on television.