A look at some common show jumping position faults in the sport of showjumping. A few very common faults with rider position and proper rein release while showjumping. 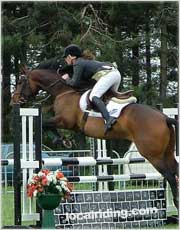 This usually occurs if the rider pinches or grips with the knees, if they lack contact throughout the whole leg (for example, has no contact
with the thigh), or if they ride with stirrups that are too long to provide support.

Since the lower leg is the riders anchor, a swinging lower leg greatly decreases security and can be very dangerous if the rider is jumping complex fences at high speeds.

There are two acceptable occasions for a swinging leg.

However, In both cases you will see riders that are still able to maintain a classical position.

This is usually accompanied by the swinging lower leg. In some cases it is due to the rider standing on her toe, instead of sinking her weight down her lower leg.

Again, this places the rider in a very precarious position.

Pushing the lower leg slightly forward is appropriate for some fences (such as cross-country) for added security. However, it is not appropriate for riding on level ground in a manicured arena at low speeds.

Shoving the lower leg forward tends to decrease the rider’s ability to stay with the motion, placing them in "the back seat" and risking that they will fall down on their horse’s back while over a fence. 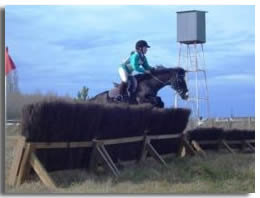 This involves the rider opening the hip angle over the fence, rather than folding back, so that the majority of their body is in front of the line made by the stirrup leather.

The lower leg usually swings backward. It places the rider in a very insecure position, since the rider not only loses her base of support (her lower leg), but also is in front of the horse’s centre of motion. This means that the rider will fall forward (and possibly off) if the horse for any reason slows down his motion, (stops, runs out, or stumbles).

Secondly, this throws the rider’s weight over the horse’s shoulders, making it very difficult for the horse to pick it up as he takes off and harder for him to get out of trouble on landing.

Riders most commonly jump ahead if they are trying to jump for their horse or if they anticipate the take-off and do not wait for the horse to close their hip and knee angles. It is also seen in the hunter arena, as some believe it makes their horse’s jump look more powerful.

When the riders body is mostly behind the line made by the perpendicular stirrup leather and behind the horses motion.

This results in the rider placing extra weight on the horse’s back.

Although hitting the horse in the back is a huge fault in the hunter and jumper arenas, because it punishes the horse for rounding into the bascule which is essential in those disciplines.

It is acceptable when riding the cross-country phase in eventing.

This is because it places the rider in an extremely secure seat (as riders usually fall off over the shoulder of the horse, not the hindquarters), and because a great bascule is not encouraged cross-country.

Instead, it is better if the horse jumps slightly flat for most fences, because they are very wide, and because a flat jump is usually a quicker jump, therefore making it easier for the rider to make the time.

This position is performed in degrees depending on the type of fence, with most fences where the rider is behind the motion but not putting his seat bones on the horse’s back, and others, such as drop fences, where it is essential that the rider keep his seat completely in the saddle
for security purposes.

However, getting left behind sometimes occurs if :

In all cases, the rider must slip the reins to provide the horse freedom of movement to get over the fence. 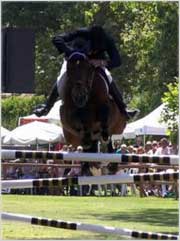 When the rider bends her hip angles too much, and snaps her upper body over one shoulder.

This makes the horse carry uneven weight on one side, which makes it more difficult for him to jump.

Tends to occur when the rider has too much weight in one stirrup, instead of being evenly centred.

Snapping up a position fault to be avoided …

When the rider throws his or her upper body upward, quickly opening the hip angle on the landing side.

This runs the risk of the rider catching the horse in the mouth or putting too much weight on the horse’s back.

It can also disrupt motion of the horse’s jump.

It usually occurs when a rider has gotten into the habit of falling forward (usually because the lower leg swings back).

The rider then tries to compensate by bringing the upper body back too soon before the horse has completed the jump.

Failing to Release the Rein Properly … 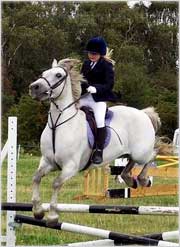 This is a mortal sin in all riding circles, as it can cause the horse to jump flat and, will eventually make the horse detest jumping.

The horse will learn to associate showjumping with pain and will eventually lead to refusals, stopping and running out.

A poor release may occur for several reasons …

Some riders do this when they are mounted on strong horses, and they wish to tell the horse to slow down over the fence before landing.

Or they get into the habit of overusing their hands between fences and forget to release.

In this case, the rider must make a conscious effort to remember to release the horse during the jump.

Occasionally, it appears as if a rider is not releasing enough, when in fact she is slipping the reins or performing a correct automatic release.

An incorrect release. Another of the common showjump position faults …

This occurs when the rider releases by shoving her hands above the horses neck, into the air, or way down below the neck.

This not only looks sloppy, but changes the riders balance over the fence.

See … Releasing The Rein. Different releases are used depending on the circumstances, but all riders should be ready to use each release as needed.

See also … Showjump Riders Position. Giving Your Horse Room to Jump. The riders position or show jumping seat position is not meant to be held by the rider, but is rather a fluid seat that changes as your horses balance changes.