There is no requirement by the British Show Pony Society to show a pony in a double bridle, and at Novice level the pony must be in a snaffle bridle.

At all levels the judge will take into consideration the severity of the bit used.

If a double bridle is used the straps of the bridle should be small and neat and complement the pony’s head.

Usually the noseband and browband will be raised and patterned. 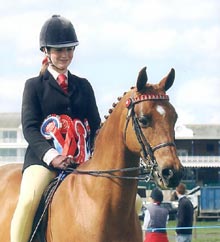 The bridoon and weymouth bits should also be small, with a short shank on the curb.

A Tom Thumb Weymouth would be ideal.

Running gags are not allowed alone or as part of a double bridle.

You must ensure the show pony rider has been given some training in how to use the double bridle properly.

If a child is nervous or inexperienced a better alternative is often the Rugby Pelham, which outwardly resembles a curb and bridoon but has a much less definite action.