Ragwort is a common weed that grows throughout the British Isles. Ragwort and horses has always been a problem for horse owners.

Ragwort thrives on wasteland, road verges and railway land and it easily spreads to grazing land and pasture.

Recently though, it has become apparent that ragwort may be getting out of control and posing a real threat to the horse population.

Closely growing grass sward prevents ragwort growth but when the grass becomes thinned out, due to poaching or over grazing, the seeds are able to germinate in the exposed soil.

Most animals will avoid eating ragwort as long as they have an alternative source of good food.

This can be a problem on sparse, overgrazed pastures where ragwort can thrive.

There are reports that horses can acquire a taste for ragwort, especially if there is little else to eat. 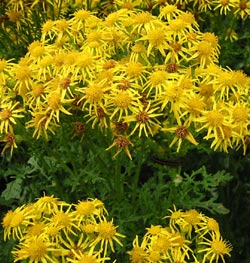 When cut or wilted (ie; when making hay or haylage) ragwort loses its bitter taste and becomes palatable to horses.

Drying does not destroy the toxins and dried grass, hay and haylage are common sources of ragwort poisoning.

Ingestion of the pyrrolizidine alkaloid toxin contained in ragwort usially results in the delayed onset of chronic, progressive liver failure.

It produces small rosettes in the spring and flowers from July onwards, in its second year.

Ragwort toxins are cumulative and it is common for ragwort poisoning to occur following consumption of small quantities of the plant over a long period of time.

Development of the disease can be delayed from four weeks to six months after eating the plant.

Different types and sizes of horses have different levels of susceptibility to the toxin.

If long stems of ragwort are cut, the plant behaves like a perennial, (flowering every year)

Each ragwort plant produces 150,000 seeds that remain viable for years. It is easily spread by air turbulence created by passing traffic.

Ragwort is one of five injurious weeds covered by the provisions of The Weeds Act 1959.

Ragwort and horses is a poisonous combination but so to is ragwort and ponies, donkeys and other livestock.

Ragwort causes liver damage, which can have potentially fatal consequences.

Under the Weeds Act 1959 the Secretary of State may serve an enforcement notice on the occupier of land on which injurious weeds are growing.

This will require the occupier to take action to prevent the spread of injurious weeds.

The following three risk categories are provided as guidelines for assessing risk:

BHS hoped to provide for a code of practice to prevent the spread of ragwort. The UK Government supported the Bill and the Ragwort Control Act came into force in February 2004.

Defra worked with the British Horse Society and other stakeholders, including English Nature, Wildlife Trust and ADAS to produce the code of practice, which was launched at the Royal Show in July 2004.

The occupier or landowner of land where ragwort is found growing is responsible for controlling this poisonous plant.

Horse owners are often concerned about ragwort spreading from nearby fields or roadside verges onto their horse’s grazing, Defra advise that the horse owner initially approach the land owner/occupier to request that they take steps to prevent the weeds from spreading.

If this approach is unsuccessful, the problem should be reported to Defra using the complaint form on the DEFRA website:

High priority is given to complaints where ragwort is encroaching upon land used for: grazing or keeping horses.

Contact details for reporting ragwort problems on roads or railways: