The American Paint Horse is extremely popular in traditional stock-horse events as well as a variety of other Western riding disciplines.

American Paint Horses have a combination of white and any other color in the normal equine spectrum.

In 1519, the explorer Hernando Cortes carried two horses described as having pinto markings on his voyage.

This is the first known description of such horses in America.

Then by the early 1800’s horses with Paint Horse coloring populated the Western United States.

A favorite among American Indians, the colored Paint horses were particularly well-liked by the Comanche Indian tribe. Evidence of this is found in drawings painted on buffalo robes.

Throughout the 1800s and into the late 1900s these painted horses were called pinto, paint, skewbald and piebald.

In the early 1960s, interest grew in preserving and promoting horses with paint coloring and stock horse builds.

Horse’s from the true American Paint Horse breed will sport a combination of white and any other color of the equine spectrum: black, bay, brown, chestnut, dun, grullo, sorrel, palomino, buckskin, gray or roan.

Their markings can be in any shape or size and can be located anywhere on the horses body.

The variety of colors and markings appear in three specific coat patterns: Overo, Tobiano and Tovero. 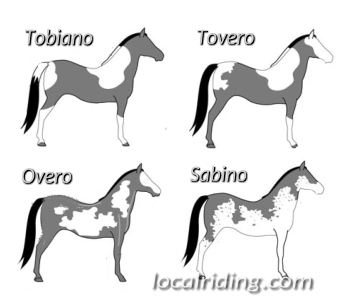 There is also a Sabino paint horse breed, which is used to describe fleabitten grey horses with four white feet and white legs. The white colouring will extend up the legs in ragged patches and onto the body. The head is usually mostly white and the eyes blue.

Judys Bear is probably the fastest Paint horse that has ever run in the Rocky Mountain Region of the USA. 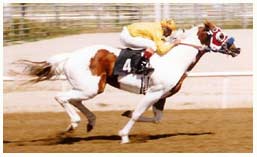 As a 3 year old he ran against the very best Quarter Horses and won.

Judys Bear is the fastest son of Judys Lineage. He is a Champion 2 and 3 Year Old Colt.

To breed a good stallion you need a good sire and an outstanding dam. Judys Bear’s sire, Judys Lineage has sired winners of over $2 million.

He is one of the leading sires of the Paint horse breed.