The Use of Thoroughbred Sires and Mares in Quarter Horse breeding.

The outstanding sires in the Quarter Horse type have not always been horses that traced their male lines of descent to recognized Quarter Horses; some trace to registered Thoroughbreds.

In addition, many of the mares to which Quarter Horses have been mated have been Thoroughbred mares or mares of other breeds, so it can truly be said that the breed has been and still is in a formative period.

Breeders have never objected to Thoroughbred breeding provided the horses were of the correct type.

Eighteen of the first nineteen registration numbers assigned to horses in vol. I of the American Quarter Horse Stud Book were saved for living horses that had proved themselves as outstanding sires of offspring of Quarter Horse type.

Many ranchers interested in short-distance racing have contributed to the development of the Quarter Horse breed.

Probably the first really noted improver was William Anson of Christoval, Texas. Mr. Anson was an excellent stockman who collected a band of horses of Quarter type.

Among the best stallions he used was Harmon Baker by Peter McCue.

Mr. Anson not only bred, used and raced Quarter Horses he was also a student of the early history of Quarter Horses and attempted to concentrate bloodlines that he felt were useful in racing and range horses. 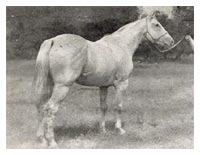 Another noted Texas breeder was W.T. Waggoner of Vernon and Fort Worth, Texas.

Mr. Waggoner collected the fastest short-distance horses that he could obtain, and it was said that whenever he found a horse faster than any he already owned he attempted to purchase it.

Many of the better modern Quarter Horses are only a generation or two away from Waggoner breeding because after Waggoners death, his estate carried on his breeding operations for many years.

In the foundation of the American Quarter Horse Stud Book, the term Waggoner bred was considered pedigree enough for registration, so esteemed were his horses by other breeders and by founders of the breed association.

Four other breeders who have had considerable influence in the development of the Quarter Horse through their long association with the breed and through their successful breeding operations were: