The first horse of the Quarter Horse breed that attracted attention in the American Southwest, was Steel Dust

Foaled in Illinois in 1843 and taken to Lancaster Texas in 1846, Steel Dust was a blood bay that stood 15 hands high and weighed approximately 1,200 pounds.

Steel Dust was sired by Harry Bluff and traced to Sir Archy. 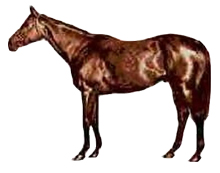 The popularity of Steel Dust as a running horse and as a sire of running horses and cow horses meant many horses that descended from him, or were of similar type, were also called Steel Dust.

This name was quite common until the American Quarter Horse Association was established and the name Quarter Horse was officially adopted.

Other outstanding stallions were introduced into Texas before and after Steel Dust.

Among these were Cooper Bottom by Sir Archy, foaled in Pennsylvania in 1828.

In 1839 he was taken by General Sam Houston to Texas, where his descendants were considered very fast and made excellent cow horses.

Old Shiloh foaled in Tennessee in 1844, was brought to Texas in 1849. He was four generations removed in the male line of Sir Archy.

Locks Rondo, three generations removed in the male line from Shiloh, was foaled in Missouri about 1866 and was taken to Texas about 1868. Later he was also used as a sire in New Mexico.

In 1889, Traveler a horse of unknown pedigree, was shipped to Texas in a carload of horses and legend has it that he had originated in Kentucky.

Traveler was apparently not considered a valuable horse because he was used on a scraper and at one time changed hands in a crap game.

Traveler and his descendants were mated to some excellent mares and many Quarter Horses can today, trace to him in male line of descent.

The most famous of all sires in the establishment of the Quarter Horse breed was Peter McCue, foaled in 1895 and bred by Samuel Watkins of Petersburg, Illinois.

Peter McCue was registered as a Thoroughbred but evidence was later presented that he was not sired by the horse indicated in his official pedigree but was instead sired by Dan Tucker, who in turn traced his male line to Shiloh.

Peter McCue stood for service in Texas, western Oklahoma and in Colorado. Most modern Quarter Horses can trace their line back to him.

Of the 11,510 Quarter Horses that have been registered prior to January 1, 1948 …, 32,304 of them are traced in male line to Peter McCue through his sons, grandsons, and great-grandsons.

Traveler was the only horse that approached him in importance of male lines with 749 similar descendants that had been registered up to that date.