Development of the Quarter Horse began in the south western parts of the United States in Texas, Oklahoma, New Mexico, eastern Colorado, and Kansas.

Some breed historians maintain it is the oldest breed of horse in the United States and that the true beginning of the Quarter Horse was in the Carolinas and Virginia.

The suggestion is that the Chickasaw horses obtained from the Indians were the true beginning of the Quarter Horse.

They were small blocky horses, probably of Spanish extraction, which the planters secured from the Indians, and which were adapted for a variety of uses.

The American colonists were quite interested in short races, and it was only natural that they should attempt to increase the speed of their horses. 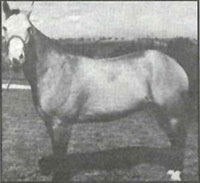 The early improvement in the Quarter Horse, named because of its great speed over the quarter mile, and the early development of the Thoroughbred in the United States were closely bound.

Some sires contributed notably to both breeds. Many short-distance horses were registered in the American Stud Book as Thoroughbreds, even though they could not trace their lines to imported English stock.

However, It is more logical to assume that the true establishment of the Quarter Horse took place some time later in the southwest range country, rather than in colonial times.

It was in the southwest that the true value of the short-distance quarter horse was truly appreciated.

The cowman found the Quarter Horse quick to start, easy to handle, and of a temperament suitable for handling cattle under a wide variety of conditions.

Even in the Southwest much was unknown of the breeding of many of the horses that were classified and registered in the 1940s as Quarter Horses.

It is logical, therefore, to conclude that until the Stud Book was established and the pedigrees were based on fact rather than on memory and assumptions, the Quarter Horse should have been called a type of horse rather than a breed.