Moorlands Totilas ridden by Edward Gal of The Netherlands created a new world record Grand Prix Freestyle score of 90.750 per cent to claim the individual gold medal at the European Dressage Championships. 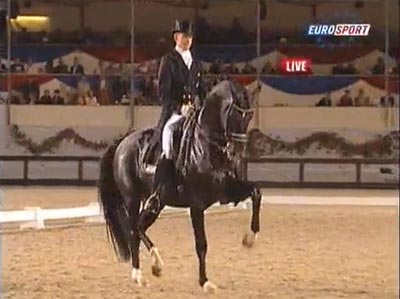 Performing before a packed floodlit stadium on a chilly Saturday night in August 2009, Edward Gal rode a superb test.

Adelinde Cornelissen on Parzival won silver, following her gold in the Grand Prix Special on Thursday.

Anky van Grunsven and Salinero took the bronze to complete Dutch domination of the biennial championships.


All three medalists scored more than 87 per cent and all three riders are from the Netherlands. A wonderful first for dressage in the stunning setting of Windsor Castle.