Equestrian Mark James Todd, was born on March 1, 1956 and is a successful equestrian eventer, born and living in New Zealand.

Mark was voted Rider of the 20th Century by the International Equestrian Federation, (Fédération Equestre Internationale or FEI). 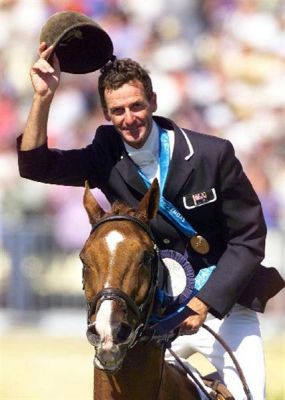 Mark Todd was Born in Cambridge, New Zealand, and rode at Pony Club as a youngster.

He competed at local shows and suffered the usual broken bones and injuries in pony club events.

Mark is said to have considered becoming a jockey but when he grew to 6ft 2in he was forced to reconsider his options and moved into showjumping instead.

He impressed judges with his elegant riding and how he was able to coax exceptional jumping talent from horses which other riders had decided were not worth the effort.

Fellow New Zealand Team member Andrew Nicholson, is quoted as saying … "Mark can ride anything – he could go cross-country on a dairy cow!"

On leaving school Mark pursued a career as a farmer, gaining a Diploma of Agriculture at the Waikato Technical Institute, and working on farms while fitting in riding, competing and selling horses.

In 1978 Mark was part of the first New Zealand three-day event team to contest a world championship, at Lexington, Kentucky, U.S.A.

On a brutal Lexington course Mark was doing well holding 10th place after the dressage and second in the steeplechase; when his horse, Tophunter, broke down during the cross-country stage.

The championships opened Marks eyes to international equestrian three-day eventing. He juggled his finances, sometimes having to sell his horses, moved to England where he mucked out stables and began to earn event rides.

Badminton is seen as the Wimbledon of eventing and Mark Todd was a virtual unknown when he arrived. His close friend Andrew Nicholson was his groom.

Mark Todd has gone on to become the most successful individual eventer in equestrian history.

Mark Todd is recognized as a pioneer of three-day eventing in New Zealand.

Mark Todd and fellow equestrian Andrew Nicholson, are the first New Zealanders to have competed at six Olympic Games

Vaugh Jefferis once said … "We all owe a huge debt to Mark Todd. He was the first, and he paved the way for us".

Most notable among the horses Mark Todd has ridden is Charisma

Charisma was retired to a Waikato farm after the Soul Olympics but continued to partner Mark for many public appearances including flag bearing at the 1990 Commonwealth Games in Auckland New Zealand.

Mark married Carolyn Berry in 1986. He has a daughter called Lauren who is currently attending university and a son, James, who is still at school.

Mark remained closely involved with the administration of eventing, acting as coach for the NZ Olympic Eventing team at Athens in 2004. He continued
to compete in eventing at a local level and to support the sport in general.

He, Caroline, and their children moved to Rivermonte Farm near his home town of Cambridge in Waikato to breed horses and concentrate on several business ventures, including the manufacture and sale of harness and other horse tack.

He has become a familiar face at racetracks where his thoroughbreds have enjoyed success, including wins in the Wellington Cup and New Zealand Oaks.

Marks autobiography, So Far So Good, has become a popular seller among the international equestrian scene.

He has had several other books published including Charisma (1989); One Day Eventing; Mark Todd?s Cross-Country Handbook (1995) and Novice Eventing with Mark Todd (1996).

He has also produced a series of training videos.

On the 25th January 2008 Horse & Hound announced online that Mark Todd was to make a return to Eventing eight years after he retired in Sydney.

He purchased a 10-year old grey called Gandalf to campaign for selection to ride at the Beijing Olympics in 2008.

On the 19th of May 2008 Mark Todd was placed sixth at a three-day equestrian event in Saumur, France.

In February 2009 Mark announced that he was making a full return to elite level eventing, basing himself in England with a team of up to 8 horses including Gandalf, his Beijing Olympics mount.

Subsequently achieving qualification and selection for the Beijing Olympics he put up one of the best performances of the Kiwi team, in what was only his eighth competition in eight years.

Following his effort in Beijing Mark and Gandalf joined a strong field of elite international eventers to compete for the inaugural Express Eventing International Cup.

Touted as the Twenty20 of eventing there was a prize pool of STG250,000 up for grabs. Sadly three refusals in the showjumping spoiled their chances of victory.

Mark Todd Competition Shirts and Competition Breeches are very popular, offering superior quality products at a great price. Designed to be practical for everyday use, but smart enough to stand out at events and incorporating the Mark Todd logo.