Over a century ago a colorful herd of hearty horses was discovered in the Kaimanawa Range of New Zealand.

Named for the mountains where they first were seen roaming free, the Kaimanawa horse has a colorful and often bloody history, and now faces an uncertain future.

The Blending of a Breed

Although the first wild horse in the Kaimanawa range was not reported until 1876, the origins of the Kaimanawa breed can be traced back to 1814, when Reverend Samuel Marsden first introduced horses to New Zealand from the Bay of Islands. 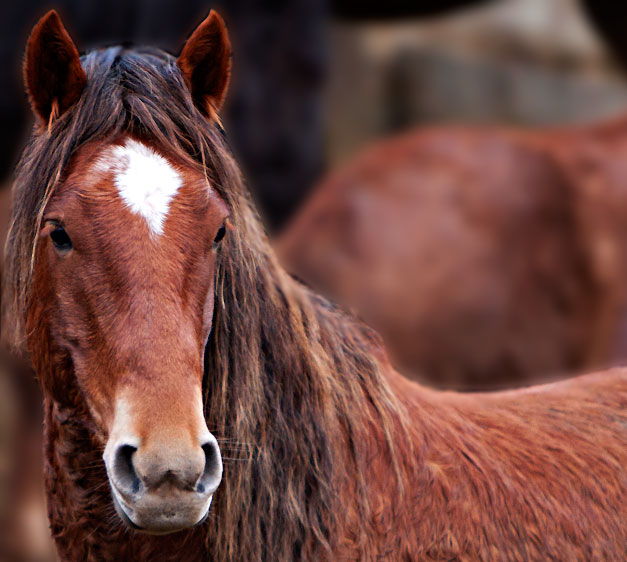 Thirty years later Tamati Waka Nene of Hokianga brought a horse to the Central North Island as a gift for the son of Te Heu Tukino.

In the 1870s many of these Comet and Exmoor horses were released into the Kaimanawa Range where they mixed with the wild horses.

Today the wild herds of New Zealand still reflect some characteristics of the Comet and Exmoor.

Still more horses crossed with the feral Kaimanawa horse in the early 1900’s, when army surplus horses were released or escaped during a strangles epidemic.

The final known influence on the breed’s genetics came in the 1960’s when Nicholas Koreneff was purported to have released a wild Arabian stallion into the herd.

The mixed breeding of the horses resulted in a colorful herd with a broad range in size, varying from 12.2 to 15 hands. The top two stallions in a herd held breeding rights, further diversifying the breed.

The adaptable Kaimanawa horse grew to be well-muscled and rugged, surviving on very little in their very rough terrain.

The Kaimanawa horses faced hardship on their range, but it was not the tough living conditions that threatened their existence. 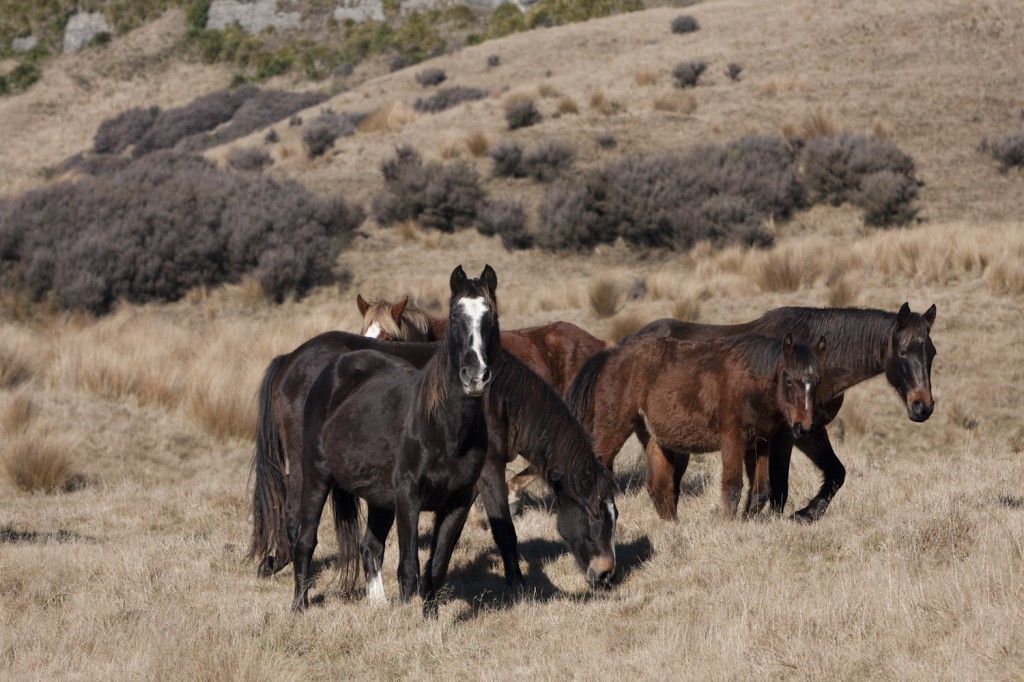 Men hunted the Kaimanawa for meat, slaughtered them for pet food, and captured them to supply rodeos with horses.

This continued until a census in 1979 revealed only 174 horses remained.

It took two years for the horse breed to receive Protected Status under the New Zealand Wildlife Act.

The Food and Agriculture Organisation of the United Nations declared the Kaimanawa horse breed a special herd of genetic value, comparing it to its cousins across the sea: the wild Mustang, Chincoteague ponies and the wild Zebra.

No longer a victim of hunting, the breed began to thrive. The Kaimanawa success story however, was short-lived.

As their numbers grew, the herds which grazed on the army training range were denounced as an inconvenience in the early 1990s.

This led to the Department of Conservation’s herd management plan which Parliament approved in May of 1996.

In an ironic approach to nature conservation, the plan lifted the herd’s protected status, moved the animals from the northern range and set in motion a plan to reduce the herd size on the southern plain to 500.

When the public heard that the Kaimanawa horses’ numbers were to be reduced by shooting, a huge outcry arose.

In August of 1996 the Prime Minister gave in to the public opposition and reversed the government’s decision to use gunfire. This, however, did little to alter the fate of the Kaimanawa horse.

The decision to cull the herd remained, and during the 1997 and 1998 roundups nearly 1200 horses were mustered.

Of those, over 500 were slaughtered, primarily for pet food. Several others died from varying incidents, including 16 who starved to death in a holding pen where they were awaiting medical trials.

Large numbers of the horses’ were allowed to remain in a semi-wild state thanks to the efforts of Kaimanawa preservationists. Over 70 of the remaining animals were broke to saddle.

In 1997 the Wai Valley Kaimanawa Horse Training Centre was established to train the horses in an effort to give them a greater chance at survival in captivity.

In the same year the Kaimanawa Horse Breed Society was set up to promote, preserve, and protect the breed.

An Uncertain Future for the Kaimanawa Horse Breeed

Each year the muster culls the number of horses back down to 500 in a continuing effort to save the plant species, protect military land, and reduce over-grazing and starvation. 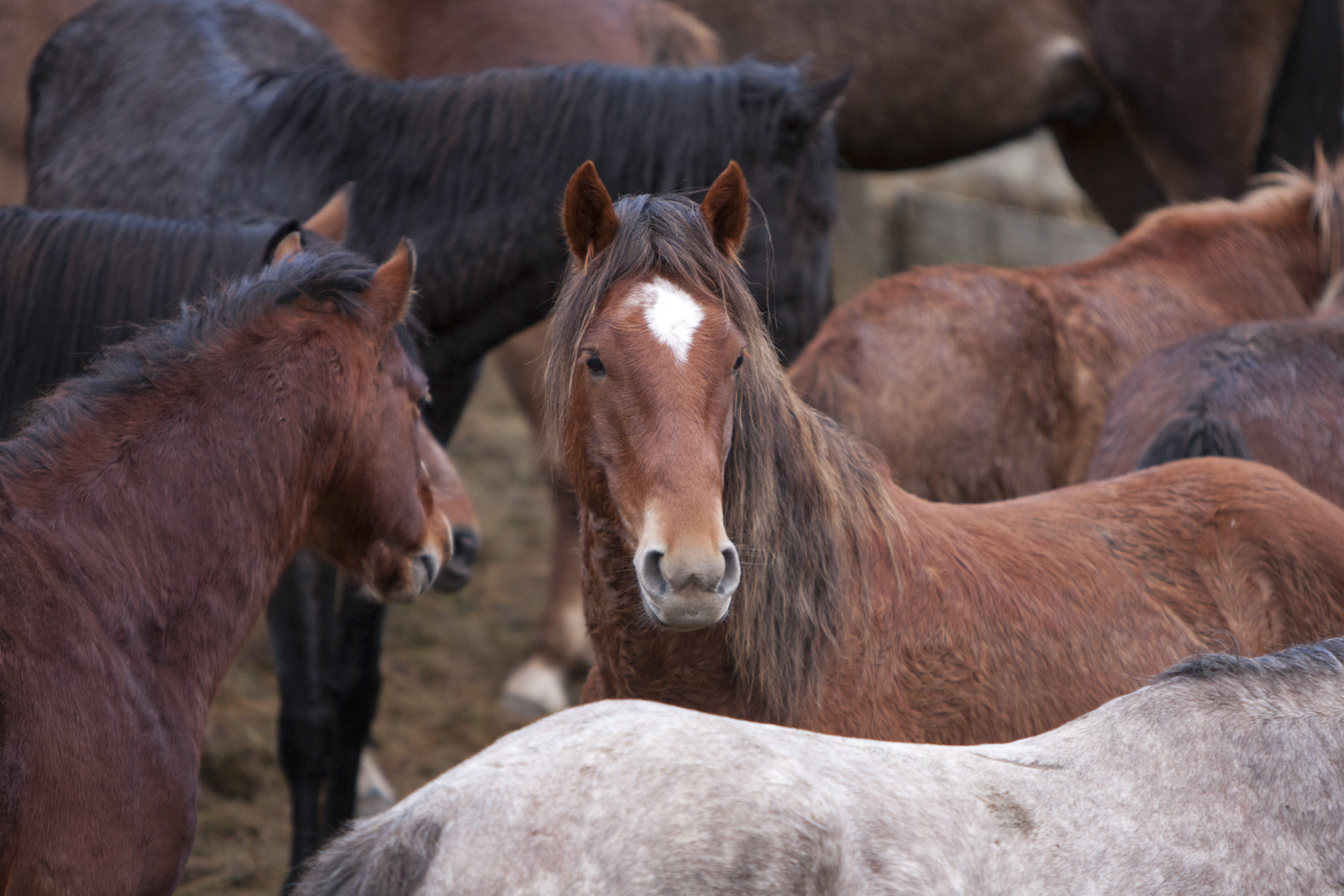 Of the horses that are rounded up, stallions are often sent straight to slaughter, while mares are held until they are adopted or killed.

The annual 2009 muster attempted to further cull the herd to 300 and brought together a surplus of 230 horses, the largest since the culling began.

Finding adoptive homes for such a large number of feral horses is an ongoing challenge, but groups and individuals band together to place as many as possible.

It is hoped that a new contraceptive vaccine will cause Kaimanawa mares to foal less often so musters can be reduced from annually to once ever two or three years, making adoption easier and slaughter less necessary.

Adopted Kaimanawa horses are proving to be excellent equine companions.

They have a calm temperament and make quality riding horses. Their origins have made them tough, sure-footed, and able to live on very little. Their intelligent and inquisitive natures endear them to their owners.

Almost all semi-wild horses that graze on private property are always threatened because of limited grazing issues, land disputes, and financial challenges.

Even more endangered are the wild Kaimanawa who face an uncertain future, battling against plants and conservationists in a bid for space and survival.

Only time will tell if this tough little horse with its colorful and bloody history will continue to grace the mountain ranges of New Zealand.