This is an account of a horse trailer accident that occurred on I-57 near Effingham, IL, shortly before Christmas. by Kari Wolter Marengo (Illinois, USA)

It involved two young women on their way home from Murray State University in Kentucky.

The girls, both in their first semester in the Equine Program at Murray, were hauling their beloved horses home to Northern Illinois for the Christmas break.

They experienced something none of us ever wants to go through, and they came away feeling very fortunate.

They offer the story of their I-57 Miracle as a lesson for us all.

It was a gloomy Monday morning when Didi and I decided to pack our bags and go home for Christmas break. We had finals the previous week and then a collegiate horse show in Tennessee that weekend, and we were the only people left on campus.

We debated about the weather a little bit, but then we got the go ahead from back home, so we packed up our horses in my two-horse bumper-pull trailer and headed north. 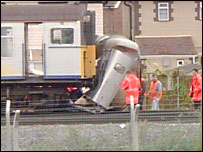 Our friend Anna also made the trip with us, and she and Didi were following me in case we ran into any problems.

The trip was going well. It was snowing, but the snow was melting as it hit the road. The farther north we got, the worse the weather got, but not so bad that we thought we would have trouble, so we pushed on.

We were about three hours north of Murray when it happened.

From what I can remember, the trailer started to fishtail a little bit and then in a split second it became uncontrollable. The trailer whipped so hard it pulled my truck with it and turned the entire rig, forcing it to skid perpendicular down the road. Didi said she could see the entire side of my face.

I couldn’t say exactly what I did next, but from what I remember, there was a big jerk from behind and my truck flew about sixty-four feet when I finally hit a snow bank. It took me a few seconds to realize what had happened. I looked behind me and there sat my trailer; roofless, dented, and doorless. I threw my truck into park and ran to the trailer in shear horror of what I might find.

I ran to my horse Johnny’s top door and tried to pry it open. 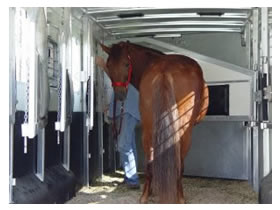 When I finally got it open, I saw him standing there eating hay as if the whole thing had never happened. I couldn’t believe it.

By this time I entered a stage of shock. Anna grabbed me and kept telling me over and over again that both horses were fine. We gave them more hay to eat and picked up what grain we could find on the side of the road to keep them calm while we waited.

When the police arrived, we all got in the back seat of the squad car. I sat there looking at the trailer and just cried because those horses shouldn’t be alive.

Anna told the officer her account of what happened. She said the trailer began to fishtail out of control and then became unhitched from the truck, hit the ditch and flipped over twice, end on end and landed upright with the two horses inside. As she gave her account, I sobbed, thinking that I could have killed my horse.

About two hours later, Marion County Sheriffs Department found someone to haul the horses to a barn in Effingham where people had agreed to keep them for the night. We got the horses there, and removed their blankets and wraps only to find superficial cuts.

We cleaned out their wounds and gave them some feed for the night. They ate as if nothing out of the ordinary had happened to them.

By this time, my dad and Didi’s family got a trailer and truck and were halfway to Effingham when we checked into a hotel for the night. When they arrived, hugs and tears were exchanged and we all choked on the miracle that had happened that day.

The next morning we loaded the horses again (they loaded with no problems at all!) and finally got to head home.

No matter how you want to look at it, someone was watching out for us that day.

The old saying that “Every cloud has a silver lining” is true. Any situation could be worse. By all practical means, those horses should have suffered injuries so severe that they should have been put down.

Or, their bodies should have gone into shock from the cold and the trauma, but that didn’t happen. They were fine and stood there the entire time, good as gold, almost as if they knew they had to stay calm.

My truck should have flipped with the trailer; it isn’t very often that a hitch comes undone. It is also a blessing that no other cars were involved, creating more unwanted disaster.

I can say that for Didi and I our greatest Christmas present came early this year.

The moral of this story is :

Another thing I learned was how close the whole horse community is.

From the guy who took the horses from the scene of the accident and ran off just saying “Merry Christmas,” not taking any money for his efforts, to the people who boarded our horses for the night and the people who lent our families another truck and trailer.

When tragedy strikes, I think we all feel it and nothing is too big of a favor to ask when it comes to helping out those in need. So not just in the Christmas spirit, but also in the spirit that should be within all of us, thank you and God bless.