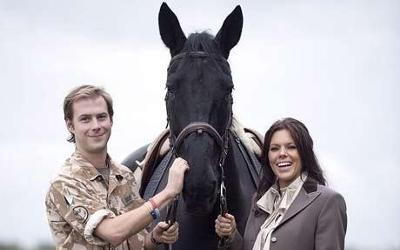 Horse Racing and Equestrian riders are uniting in an attempt to raise more than £1 million for Help For Heroes next summer with one of the largest processions of horses ever to come together in modern times.

The event is called ‘Horses for Heroes’, and will take the form of a sponsored ride, starting and finishing at Ascot Racecourse. Approximately 2010 horses will take part with every rider signing up being asked to raise a minimum of £500 in sponsorship.

The Horses For Heroes ride will cover parts of Windsor Great Park on its 7.5km route and will happen before Ascot racing on Saturday July 10 with some celebrity riders finishing up the home straight in between races.Given the popularity of the cause organiser Simon Brooks-Ward believes the 2010 places are likely to be oversubscribed…

“There are two million people who regularly ride in Britain,” says Simon. “It will bring the equestrian world together and we’ll have everything from Shire horses to Shetlands and Carriages to Carts. But we will only be walking and trotting. So hopefully, it won’t be like the charge of the light brigade.”

Among those riders currently pledged to take part are point-to-point jockey Lt Guy Disney of the Light Dragoons, who lost his right leg below the knee in Helmand three months ago, and Toni Terry wife of England and Chelsea captain, John Terry.

Guy Disney lost his limb when his vehicle was hit by a rocket-propelled grenade in an ambush during Operation Panther’s Claw. He has just finished rehabilitation at Headley Court, one of the principal beneficiaries of Help For Heroes.

Speaking at yesterday’s launch Guy explained that he had already returned to riding three weeks previously and had started running last week.

I’m picking up my riding/racing leg which is still being made at Headley Court on Monday, he explained, and going back to work on Tuesday. My guys come back from Afghanistan shortly and I’m going to join them for decompression in Cyprus. The last time they saw me I was looking a bit pale so I want to show them I’m not a complete wimp.

A sponsored ride with trotting as the maximum speed is likely to be a little on the tame side for Guy who has set his sights on riding in a yeomanry cross-country race in December. In a year’s time, he added, I hope there’ll be very little I can’t do.

Toni Terry has been riding for a just over a year but in December will be demonstrating a specially choreographed pas-de-deux with her instructor, 16-times national dressage champion Vicki Thompson-Winfield, at Olympia Horse Show.

While organising over 2000 horses and riders presents some obvious logistical problems, Mrs Terry might have her own. Horses For Heroes takes place a day before the World Cup Final in South Africa. “Whatever happens I will be riding at Ascot,” she said. “I’ll play it by ear but with any luck I’ll be hopping on a plane to South Africa, with my family straight after the ride.”

What is Help for Heroes? …

It’s about the blokes, our men and women of the Armed Forces. It’s about Derek, a rugby player who has lost both his legs, it’s about Carl whose jaw is wired up so he has been drinking through a straw. It’s about Richard who was handed a mobile phone as he lay on the stretcher so he could say goodbye to his wife. It’s about Ben, it’s about Steven and Andy and Mark, it’s about them all. They are just blokes but they are our blokes; they are our heroes.

Want to help our heroes… then check out Help for Heroes and get involved.

Comments for Horses For Heroes …

It really is about time. by: Michelle
Both my husband and son have served in the armed forces and both of them received injuries under fire in the recent Labour Government fueled wars.

It hasn’t surprised me how badly the government treat our boys but it absolutely amazes me how little the everyday people of Britain value their troops and how badly the wounded are treated.

It seems the only Brits that appreciate what our soldiers, sailors and airmen do for us, are the families and friends of current or ex-service personnel.

It really is about time the ordinary Brit displayed some pride in our country and our armed forces.

Give a little, give a lot, but for goodness sake give something.

everyone give a pound by: Carol B
“There are two million people who regularly ride in Britain,” says Simon. “It will bring the equestrian world together and we’ll have everything from Shire horses to Shetlands and Carriages to Carts.


if all us riders give a pound we’d raise two million instead of one.

At last a charity worth giving to.by: Jim Alexander
Charity should begin at home and this is one that should be right at the forefront of every equestrian brits charitable agenda.

Every day you read about some MOD equipment shortage or the MOD trying to rip off our troops. Its time for all of us to support them the way they should be supported.

And don’t get me started on that git Gordon Brown and his penny-pinching support of UK forces.

Superb Project by: Danny
What a superb project and well worth supporting.

If you can’t join the ride next year, everyone should at least buy something from the Help for Heroes store.