Estimating a horses age from teeth growth … A horses’ age can often be accurately assessed by examining the horses teeth.

This is an old nearly forgotten art that some equestrians take in their stride while others just wouldn’t have a clue where to start.

As with anything worthwhile you have to learn the art by studying examples, both live and textbook.

The images below should provide you with a good guide to estimating a horses age and help you make sure you never buy a green two year old that’s being sold off as a five year old that’s ready to bring on.

Horse teeth are often used to estimate a horses age.

It was this that give rise to the old sayings ‘Long in the tooth’ and ‘Don’t look a gift horse in the mouth’.

As a normal adult your horse has a minimum of 36 teeth. Your horse may also have up to four wolf teeth and/or canines.

All horses should have :

Six front teeth in the upper jaw, and six in the lower jaw.

Behind the incisors lie the powerful molars (cheek teeth).

The upper jaw is about 25% wider than the lower jaw, which moves in a circular motion, bringing the cheek teeth tables into contact.

An adult horse has 24 permanent molars. while an immature horse has only 12 temporary molars.

Newborn foals to one year: 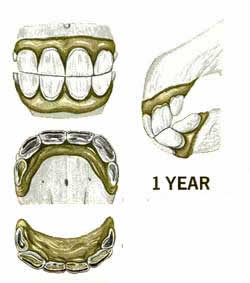 Newborn foals will have their first incisors by the time they are a week old.

At two weeks old, they should have their second, third, and fourth premolars, also known as cheek teeth.

The first premolars are actually the wolf teeth, which don’t appear until 5-6 months of age.

The last two sets of teeth your foal will produce are his second and third incisors which erupt at 4-6 weeks and 6-9 months respectively.

By one year old, your foal will have a mouth full of 24 deciduous baby teeth and two wolf teeth.

It’s important to note that the wolf teeth are small teeth located directly in front of the premolars. They are often confused with the canines which are larger teeth located in the middle of the bars of the mouth.

Wolf teeth are only on the top, while canines are staggered on top and bottom.

Often owners will have the wolf teeth removed at an early age to prevent irritation and interference with the bit.

The most noticeable change owners will see is the eruption of the permanent incisors which are bigger and more rectangular than the baby teeth. 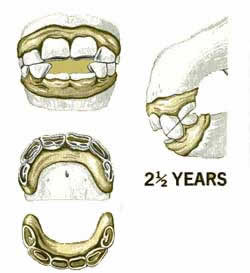 The first permanent incisors will come in at 2 ½ years as will the second premolars.

Permanent central incisors have erupted baut are not in contact. Lowers are not yet free of the gum over much of their surface.

The chewing surface of the intermediates is worn to smooth. 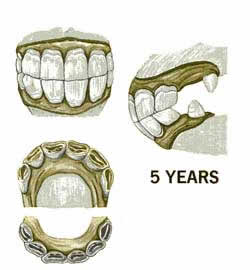 In male horses, the canines will appear in the bars of their mouth at 4 to 5 years of age.

Some mares may develop rudimentary canines depending on the presence of canines and wolf teeth.

Permanent dentition is complete. All teeth are in wear.

The canine teeth have erupted fully.

The centrals and intermediates show wear on the chewing surfaces, but cups are still visible and are completely encirecled by enamel.

Corners are beginning to wear.

By the time your horse is five years old, all the permanent teeth should be through and the gums should be a healthy pink colour with no bruising. 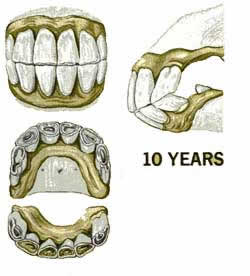 The angle of the horses jaw and teeth is increasingly oblique.

The chewing surfaces of the lower centrals and intermediates are rounded.

The dental star is more distinct and near the centre of the teeth.

Your adult horse will have 36 to 42 permanent teeth. 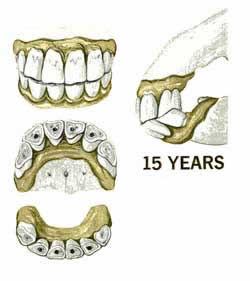 The lower incisors may appear shorter than the uppers when viewed from the front.

Galvaynes groove extends halfway down the outer (lip) side of the upper corner incisor.

The lower centrals and intermediates appear triangular on the chewing surface.

All incisors show a distinct dark round dental star in their centres. 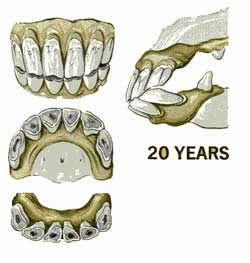 Angulation of the jaw is distinctly oblique.

All incisors are triangular.

Each dental star is round near the centre.

There is considerable spacing between the teeth.

The lowers may be worn almost to the gum.

Your equine dentist will use common horse teeth terms to refer to different aspects of your hores mouth and teeth and to areas, problems or treatments…

Why use an equine dentist? Your equine dentist is neither a new phenomenon; nor another modern invention. Tooth rasps and other equipment for looking after horse teeth were produced as long ago as the 19th Century…

Estimating yours horses age from teeth growth isn’t an exact science but if you study the images above you’ll get a rudimentary idea of what to look for. Age is particularly important if you are buying a new horse and being able to estimate the horses age will make sure you don’t buy an old nag with a young spirit.