Why a horsebox? … because every horse owner dreams of the day when they can arrive at the yard, load up their horsey friend and toddle off to a local competition or to some nice beach or woodland trail ride with the minimum of fuss.

But, very few of us consider the practicalities of owning and using a horsebox or trailer before we buy one.

And, if we’re honest, quite a few of us expect that our horse will instantly recognise a horsebox or trailer

We are then un-pleasantly surprised when our horse refuses to simply pop up the ramp and wait patiently while we get ready for that 100 mile round trip.

So, what are the main points you should consider when buying and while owning a horsebox.

Why buy your own horsebox? Independence, that’s why. 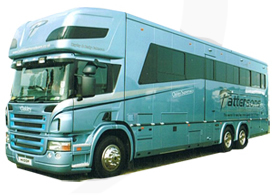 There is no more compelling reason than that you want to be able to plan your own routes, take your own sweet time and not have to rely on anyone else to get you there.

Having your own horsebox is the best, especially if it has full living and you can organise weekends away as well as the odd beach run.

Taking friends and their horses along adds to the enjoyment and makes owning a horsebox a wonderful social event.

Even a basic trailer can enhance your enjoyment of your horse and give that extra freedom to explore those wonderful bridleways and trail rides.

Just visualise all those wonderful countryside rides that would be within your reach.

That’s the dream of owning a horsebox …

The reality can be a little more down and dirty.

If, like 80% of horse owners, you keep your horse on a budget then you probably spend every spare penny you have on stabling, hay, straw, hard feed, tack and the occasional competition entry.

So, What do you need to consider before getting a horsebox?

1. What can I afford to spend on a horsebox? 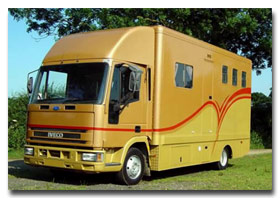 Introducing the added expense of a horsebox needs careful budgeting and you have to carefully consider some important aspects of buying, owning
and maintaining a horsebox.

Your horsebox will use substantially more fuel.

Tyres are more expensive
and you can get carried away outfitting the living and horse areas.

The good news is that a good quality horsebox will hold its value a lot better than a new car.

2. What type of horsebox will suit my purpose ?

What do you want to do with your horsebox?

Is it just a status symbol or do you travel to horse shows every week or every weekend?

Will you spend nights away from home?

Are you prepared to rough it with your horse or do you want something that will allow you to entertain friends and house you in comparitive comfort?

3. Can I drive the size of horsebox I want?

There are plenty of smaller horseboxes that can be driven on a normal car licence but for true pulling power and luxury living you might want to consider a HGV horsebox.

Do you have room at home?

Can you park it in the street?

Does your stable yard have secure horsebox parking facilities and how much will they charge?

Will your nice shiney new horsebox just be an ornament or will you outfit it to take you to hundreds of competitions every season.

Or are you an avid beach rider who loves to load up every weekend and head off to the trails and treks on far away beaches, mountain trails woodland bridle paths.

This question should be given plenty of consideration before any other as how you will use your horsebox will guide your budget and your basic requirements.

6. Who will maintain it?

Maintenance costs can be high on an older horsebox, just as they can be on an old car.

However, Finding someone qualified to maintain a horsebox isn’t as easy as popping round to your local garage.

Large horseboxes have the same maintence considerations as large haulage trucks, so it can be beneficial to talk to local truckers.

Alternatively, some horsebox sales outlets like Tyldesley Horseboxes also do servicing and repair.

If you’re thinking of buying a horsebox then talk to recommended repairers first.

7. How much will it cost to insure it?

Don’t even consider a horsebox if you can’t afford to insure it.

There are just too many horror stories about horseboxes and trailers tipping over in high winds, badly maintained floors collapsing and drivers even forgetting the trailer is on the back and misjudging bends or even crossing the train tracks.

No; running a horsebox or trailer that is badly maintained and doesn’t have proper insurance, that safeguards you or your horse in the event of an accident is just daft.

So, make sure you include the insurance cost in your budget when you calculate how much you can afford to spend or you have to borrow for your horsebox.

Comments on Buying & Using a Horsebox …

As of 5th January 2007, the EU inflicted new regulations on the UK to bring horse transport into line. The same rules will apply in the UK as they do across mainland Europe. The new laws have been introduced in order to safeguard the welfare of animals being transported to slaughter, but they will have a considerable affect on everyday horse transport.

DEFRA, are primarily responsible for integrating the new rules into the UK equestrian and agricultural world and the law will demand that anyone transporting two or more horses, for profit or gain, must apply for an Authorisation Certificate.

DEFRA it appears may be taking a slightly softer position compared to that of the Vehicle & Operators Service Agency (VOSA).

VOSA has recently declared that anybody operating a horsebox, that has received a financial reward at an equestrian event,
could be liable to prosecution if they do not hold a valid operators licence.

Horsebox owners have been warned by the Vehicle & Operator Services Agency (VOSA), that that they risk having their horsebox impounded and may receive a fine or prosecution.

As bizarre as it sounds, if you own a horsebox over 3.5 tonnes and you happen to be successful at any equestrian event where you may collect prize money as part of your spoils, then you must have a Licence to Operate, regardless of how much your winnings are for.

The principle behind the warning is that any financial gains (your winnings) may be considered by VOSA as “hire and reward”. In which case, this requires you to have a special Operators Licence. If you are not in possession of an Operators Licence, you could face prosecution, in the worst case scenario.

In addition, if you were to offer a friend and their horse a lift in your horsebox, or simply help move a horse and receive “petrol money”, you may also need to have a Licence to Operate. This is because, VOSA may perceive this to be a “hire” transaction.

VOSA has warned the horsebox owners across the UK that it will bring a case against anyone considered to be breaking these laws. Having said that, it will be for the courts to determine if you have acted in a way that requires a Licence to Operate.

some sense at last!

In line with the scrutiny under which these rules will be received, the ILPH is said to be disappointed that one of the main concerns, the maximum time period of a single journey, has not been addressed by the new horse transport rules. As with most legislation, these new guidelines appear to have a significant area of confusion.

Although DEFRA has stated that weekend competitors and drivers doing a friend a good deed for fuel money will not be targeted, there appeared to be no clear cut directive for the amateur competition yards or amateur breeders. DEFRA has stated that the way forward is to work on a case-by-case basis. Not exactly clear cut!

There is similar legislation in Spain where a license is required to move horses. However, the legislation introduced by the Spanish Government some years ago is very clear and straight forward, if a little draconian.

Spanish law states that for anyone to move a horse you must apply for a horse transportation licence. This applies to commercial operators as well as private individuals. Failure to obtain this licence could result in the horsebox, horse trailer, towing vehicle, horse and tack being impounded plus a huge fine and possible imprisonment.

If you are moving a horse permanently then the horse must be registered at the local veterinary office, normally in the town hall. Known as the Green Card, this document must be produced when requested by the police, veterinary services, council official or a potential buyer.

The dream of owning a horsebox or trailer can be very differnt from the reaility. You will pay for your freedom and independence with relatively high insurance and maintenance costs, but if you can afford it we’d recommend it to every horse owner. There is nothing quite like being able to load your horse and go where you want, when you want.
Close