The Fair City of Perth in Scotland is the county town of Perthshire and is also known as St John’s Town or simply as the Fair City.

Perth was Scotland’s capital city in the 12th century.

It has the important Scone Palace nearby, but today it’s a pretty quiet place with around 50,000 inhabitants, many of whom work in the financial services industry.

Perth’s city centre is compact with two large and open public parks – the North and South Inches on each flank and the mighty River Tay along side.

Much of the Perth’s High Street is a traffic free precinct with a wide variety of shops large and small. Many of the streets around the centre are comprised of elegant Georgian terraced houses.

Perth has probably always been a centre for farming and less dependent on the traditional Scottish industries of fishing, textiles and engineering. Not only did this give rise to it’s relatively small size but also to it’s air of prosperity.

The city is a bustling market town with much to offer the tourist. Shops, galleries and theatre in the town centre. Scenery, castles, history, walks and attractions in the country around. Nearby is historic Scone Palace and Perth Racecourse.

The city has been a Royal Burgh since the 13thC and was a Royal residence throughout the middle ages. Perth is often refered to as the Ancient Capital of Scotland on this account.

Nearby Scone is the ancient coronation site of Scottish monarchs. All kings and queens of Scotland having been crowned there up until the Union into the United Kingdom. Today the site is marked by the early 19thC Palace of Scone.

In 1396 the Battle of the Clans took place on the North Inch of Perth. 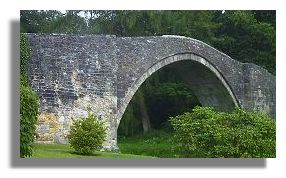 This was a gladiatorial fight to the death to settle a long running feud between the powerful Chattan and Mackay clans.

30 warriors from each formed before Robert III. All Mackays died, except one who swam the Tay, to the loss of 10 Chattans. Legend has it that the Chattans were a man short so a local saddler was paid to take the place. He survived, having joined
the winning side.

James I was murdered at Blackfriars in 1437. This was his favourite residence. When assassins burst into his bedroom he attempted to escape through a tunnel. Unfortunately he forgot that he had ordered the far end blocked by a grill. This had been fitted to prevent him losing tennis balls down the uncovered exit. 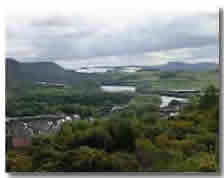 The Reformation (rise of Protestantism) began in Perth in 1559 when John Knox gave a sermon in St John’s Kirk.

There has been a church on this site in the centre of the city for at least a 1000 years. The present building dates from the 15thC but was restored in the 1920s.