Horse riding and equestrian facilities in the English County of Nottinghamshire.

Nottinghamshire is a County in England’s Central Region and is a county of picturesque landscapes, historic towns and pretty villages.

Nottinghamshire has a rich variety of attractions including castles and museums as well as the world renowned Sherwood Forest.

Notable places of interest include the birthplace of DH Lawrence, Rufford Abbey and Nottingham Castle Museum.

Nottinghamshire has a rich equestrian heritage and is home to a great many horse owners.

The county of Nottinghamshire is situated in the central region of England and is divided into eight districts.

The city of Nottingham is the birthplace of D.H Lawrence, the famous author but is more famously known for the legends of Robin Hood and Sherwood Forest, which was once a royal hunting forest.

The oldest pub in England resides in Nottingham and dates back to 1189 AD.

Nottingham Old Market Square is the biggest market square in Britain and holds an annual Goose Fair, one of Europes largest travelling fairs dating back to 1541 where you can experience everything from white knuckle carnival rides to Victorian side stalls.

The Jerusalem Inn was visited by the knights on their travels to the crusades in the Holy Land and many of the interior rooms are actually caves carved from the rock.

Nottinghamshire has a rich variety of attractions including castles and museums as well as the world renowned Sherwood Forest.

Sherwood Country Park lies just north of Edwinstowe, two miles from Ollerton and 17 miles north of Nottingham on the A614 Nottingham Doncaster road.

The park is within an area derived from a Scandanavian name birch lund, now known as Birklands. 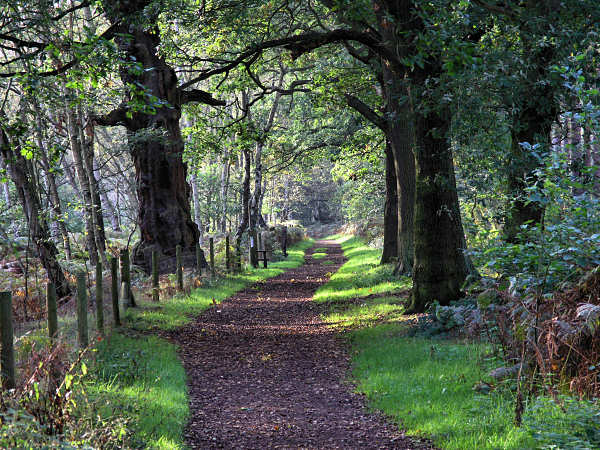 The name ‘Sherwood’ was first recorded in 958AD when it was called Sciryuda, meaning ‘the woodland belonging to the shire’.

Sherwood Forest became a Royal hunting forest after the Norman invasion of 1066, and was popular with many Norman kings, particularly King John and Edward I.

The ruins of King John’s hunting lodge can still be seen near Clipstone.

Admirers of DH Lawrence (1885-1930) should visit the museum dedicated to him in Eastwood, Nottinghamshire.

Lawrence, the great 20th-century writer and poet once said of it …

"The scene of my Nottingham-Derby novels all centre around Eastwood, where I was born; whoever stands on Walker Street will see the whole landscape of Sons and Lovers before him".

This superb mansion containing Nottingham’s museum and art gallery sits on a green and pleasant mound high above the city.

Nottingham Castle Museum and Art Gallery was the first municipal art gallery in the country outside London, opening its doors to the public for the first time in July 1878. Standing high on Castle Rock overlooking the City, the site is visited by over 270,000 visitors each year

Rufford Country Park is just south of Ollerton on the A614 North east of Nottingham.

Rufford Abbey was founded by the Earl of Lincoln in 1146. It was suppressed in 1536 and the site acquired by the Earl of Shrewsbury who converted the west range of the cloister buildings into a private house and Rufford passed to the Savile family in the 17th century.

The house fell into disrepair in the 1940s and much was demolished in 1956. Wragby Hall in D.H.Lawrence`s Lady Chatterleys Lover is based on Rufford.

Set in a quiet market town, Southwell Minster with its majestic Norman nave and glorious 13th-century chapter house is one of the least known
jewels in the crown of Nottinghamshire.

For many generations the Minster has been an important centre of Church life in Nottinghamshire. Its noble fabric has been used and admired by eminent divines and statesmen who have loved to worship here.

Newark Castle was originally a Saxon fortified manor house, founded by King Edward the Elder. In 1073, Robert Bloet, bishop of Lincoln founded an earthwork motte and bailey fortress on the site. Newark Castle is located in the town centre, off Castle Gate. 15 miles south-west of Lincoln, on the A46. The site and the Gilstrap Heritage Centre in the castle grounds, are open daily, 9:00-6:00pm summer 9:00-5:00pm winter.

A beautiful historic house set in a glorious landscape of gardens and parkland within the heart of Nottinghamshire, England. Newstead Abbey, best known as the former home of the poet Lord Byron, was originally an Augustinian priory founded by Henry II in about 1170. A small religious community existed there until Henry VIII dissolved the monastery in 1539.

Sherwood Heath Local Nature Reserve, near Ollerton, has been designated as a Site of Special Scientific Interest.

Sherwood Pines Forest Park is a pine woodland with areas of birch, oak, sweetchestnut and beech. The park is situated off the B6030 quite close to Old Clipstone (now known as Kings Clipstone). All walks and cycling trails start at the Visitor Centre, it is a great day out for all the family. Close to the Visitor Centre is an adventure playground and a picnic site, there is even a barbeque site near the car park. The visitor centre provides a shop, food, drink and information, close by is a cycle hire centre.

Nottinghamshire also has a wide variety of Country Parks