Get to know the Horse Markings and identifying marks on your horse.

Horse markings can usually be assigned a standard term, especially markings on the horse’s head and legs.

While the descriptions on this page can be considered reliable, it is very important that, if you are registering your horse you consult the registering organisation for their definitions of horse markings.

Marking definitions often differ from one organisation to another.

And; may also be different than the descriptions we’ve used here.

People who spend time around horses appreciate equine anatomy and understand it.

Horsey people talk about horses bodies the way mechanics talk about cars, which is why knowing the correct terms is important. 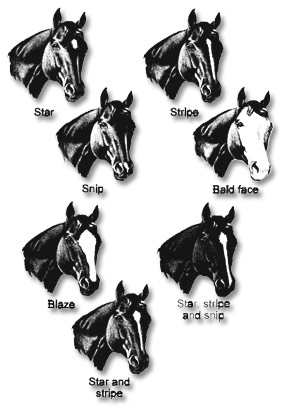 Face markings are usually white in color and can run together or appear in separate combinations.

Not every organisation agrees on what certain markings should be called but most of the descriptions on this page are accepted.

A bald face is a very broad blaze that, for all or part of its length, extends to or past the inside corner of one or both eyes. A bald face is also a long marking running from the top of the face down to the nostrils, and often includes the nostrils. A horse with a bald face frequently has a wide snip. An especially wide bald face is sometimes called an apron face.

A blaze is a wide white marking that runs for all or most of the length of the horse’s face.

Snip – A snip is a small white marking between the nostrils.

The pink skin beneath the hair of the snip is often easily seen. Snips often extend down onto the upper lip where there isn’t any hair, so they show up as pink skin.

A star is a white marking on the forehead, usually defined as between or above the eyes. Stars can be large or small, and can come in any shape: Round, oval, crescent, half-moon, heart, or in any variety of irregular or hard to describe shapes.

A strip is a white marking in the middle of the face. It is very narrow compared to a blaze. A strip may run for all or only part of the length of the horse’s face. A strip is also sometimes called a stripe. If a strip is not straight but is instead crooked or wavy, it may be called a "race."

As with horse face markings the horse’s leg markings fall within specific categories and most are clearly defined.

All, markings, (except for the bay coloured horse) are usually white. The bay horse has a brown body with black stockings and a black mane and tail.

There is an old rhyme that advises horse buyers to assess potential purchases on the extent or type of the horse’s leg markings.

The rhymes imply that horses’ with white socks have hooves that are softer and weaker, and in some circles, that the horse could tend to be somewhat stroppy or unmanageable.

But modern domestic horse’s provided with good nutritious food and access to good grass and the care of a qualified farrier, should never normally be a problem. 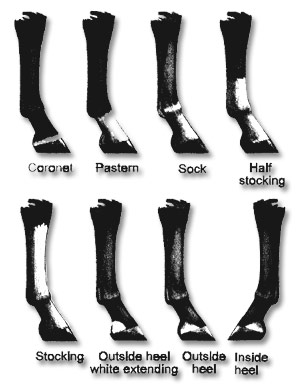 A small white band just above the hoof