The history of horse saddles begins when Celtic cavalry served as mercenaries to the ancient Egyptians.

Then saddles were simple cloths without stirrups, and all horses were ridden barefoot.

In contrast bridles and bits, familiar in design to be fitted by the modern rider, have been in use since 3500 BC.

Without the girth horse saddles are useless.

But with a girth to anchor it securely to your horse the saddle is a superb piece of horse tack and it has been progressively developed throughout history.

From the original soft pad, riders developed the leather pad, to which additions could be made with rolls of stitched cloth and rigidly stuffed leather panels.

The use of leather opened up the horse saddles potential

And the ability to set wet leather to dry over a frame and tighten produced a saddle far stronger and more hard wearing than cloth pads.

The leather was then fitted over a padded wooden former and this became the origin of the saddle tree.

Even so, a rider mounted in a frame saddle has no way to brace himself against the force of his own or other warriors blows, nor had he any way to maintain balance until the introduction of stirrups.

Historic use of the saddle …

According to Historian Lynn White: (Medieval Technology and Social Change) :

The history of the use of the horse in battle is divided into three periods:

The stirrup was a Chinese invention somewhere around the time of the first century. 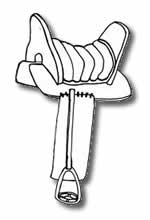 The advantage it offered the cavalryman was such that its use spread throughout the steppes of central Asia and eventually the Mongol tribesmen brought the stirrup to Europe.

The earliest written record of the saddle stirrup dates from 580 A.D, when a military manual of the Byzantine emperor mentions the need for stirrups.

So important was this new piece of equipment that it is sometimes claimed that the introduction of the stirrup laid the foundation for European feudalism.

This then, is the history from which the modern saddle has evolved, to provide a secure seat from which to battle or wage war at speed.

An alternative to the tree’d saddle …

However, here and there in history and myth, references are found to riding horses without bit or saddle.

Warrior groups such as the Celtic Irish chieftain Finn Mac Cumhails Fianna were said to disdain the use of a bit or saddle, riding using their skill and trusting the forbearance of their horses alone.

Shadowfax …
If he will consent to bear you, bear you he does; and if not well, no bit, bridle, whip, or thong will tame him.Lord of the Rings

The same idea has also surfaced many times in works of fiction, where for horses such as Shadowfax from Tolkiens epic Lord of the Rings there is neither bridle, bit or saddle;

So, is the idea of riding by co-operation rather than by force, using both a bridle and saddle designed with the comfort of the horse foremost a matter of romance or a realistic and humane alternative for the average rider?

We’ve established that the major reason for the development of the frame or tree’d saddle was to improve its qualities as a secure fighting platform.

Likewise, working saddles such as the Western, Camargue and Spanish Vaquero were developed directly from the medieval war saddle, the need for a platform from which to work cattle taking over from the need to use weapons.

In each case there is a good thickness of padding to prevent the material of the frame rubbing on the horses body.

The English style cavalry saddle went some way toward reducing weight and improving flexibility for more modern light cavalry and has become the standard on which most saddles used in equestrian sport are based.

Yet often, particularly in older saddles, the attachment point for stirrup leathers results in the majority of weight being carried close to the shoulders and wither where it would tend to interfere with the free and fluent movement of the horse.

The further development of the synthetic tree allows a far greater flexibility than the fixed wooden tree, but that flexibility can in itself be a problem.

The synthetic tree also flexes on mounting, with the result that it can easily twist, and, as heat develops during a ride the gullet can open more bringing it into contact with the wither.

The saddle in an ideal world …

In an ideal world every rider could afford to buy a saddle that had been individually tailor-made for them and their horse, with the riders weight, shape, gender and length of leg factored in as well as the tree and under panels of the saddle being contoured to fit the horse. 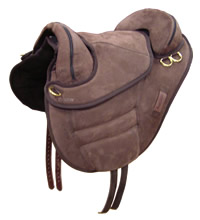 But this is rarely possible for the average person. The alternative is to go back to the pad type saddle and that is precisely what has happened.

A test conducted by well known professional equestrians involved trying two types of treeless saddle, the Barefoot and the Torsion.

And a number of different types of traditional fixed tree and synthetic tree saddles on a test stallion over several years.

As with many horses using traditional fixed tree saddles the stallion showed discomfort by the unsettling habit of moving away during mounting, and he disliked working at the trot.

A top brand dressage saddle with adjustable gullet to allow a more precise fit and greater freedom in the shoulder didn’t work too well either.

So, the treeless saddles were introduced and right from the first ride the difference was very clear. 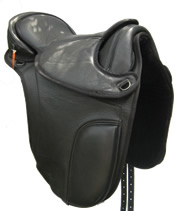 The stallions paces were lighter, transitions were far smoother and generally the stallion was more relaxed and comfortable.

After just three rides the habit of moving away at the mount had disappeared completely, replaced by perfect manners.

Rider comfort was also very good and while the treeless seat lacked the depth that is possible with fixed tree saddles the contact with the horse was excellent.

The testers also commented that when the order for the Barefoot brand saddle was placed, details such as rider height and weight were factored in so that the accessories, saddle cloth, girth and swinging fender style stirrups all fitted perfectly and suited both horse and rider well.

With long distance endurance riders increasingly making use of treeless saddles and winning it seems certain that a lot more horses are going to be enjoying fully flexible comfort in the future.

And with all the developments in horse saddles what could be more natural to complete the picture than getting rid of those old steel shoes and going bitless, treeless, and barefoot