Harmony’s Mythilus, ridden by Courtney King-Dye for the United States in the 2008 Beijing Olympic Games, has died from a colic. Mythilus was euthanized early Friday after being admitted to the Fairfield Equine Clinic in Connecticut.

The 1994 Dutch Warmblood stallion out of Ferro by a Furioso mare, was owned by Harmony Amateur Sports Foundation and Leslie Malone of Englewood, Colorado. 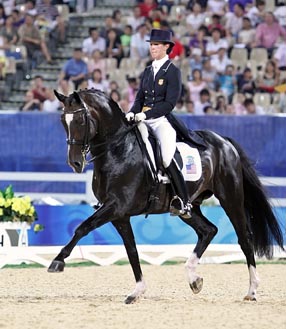 Mythilus began to colic Thursday afternoon at Bel Aire Farm in Millbrook, New York, and he was taken to Fairfield Equine Clinic in Newtown, Connecticut.

At about 10:30 pm it was clear that surgery was inevitable. Dr. Rick Mitchell and his staff did everything they could, but they found an inoperable abnormality in Myth’s colon and were left with no choice but to euthanize him.

Mythilus will be buried at Bel Aire.

In 2007 Mythilus was the top ranked horse in the United States in the small Tour, and he was Horse of the Year Intermediare 1 with an average score of 73%.

In 2008 he moved up to Grand Prix with much success. He earned a spot on the US Olympic team by placing 3rd overall in the Final Selection Trials with an overall average of 73.333%.