Fiddleneck and other related plants of the amsinckia species have been linked to causing cirrhosis of the liver in horses.

This category of plants includes fiddleneck, tarweed, yellow burr weed, fireweed and buckthorn, which are predominantly found in the semi-arid regions of Idaho, Washington, Oregon and California.

The fiddleneck plants appear in late winter and early spring.

The seeds are the most toxic parts of these plants and fortunately, the mature plants are unpalatable to most horses.

Most instances of poisoning occur when mature amsinckia species are bailed in early cuttings of hay or when contaminated grain was threshed for horses.

Some poisonings have occurred when horses were pastured on wheat stubble in contaminated fields. 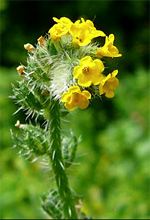 The liver can no longer filter out toxic wastes which, among other things, produces disturbances of the nervous system.

Fiddleneck affected horses have been known to walk aimlessly for miles …,

Sometimes death results from the horse getting hopelessly entangled in a fence or literally walking over the edge of a cliff or ravine.

Other behavioral abnormalities include …,