The 2010 schedule of the Exquis World Dressage Masters 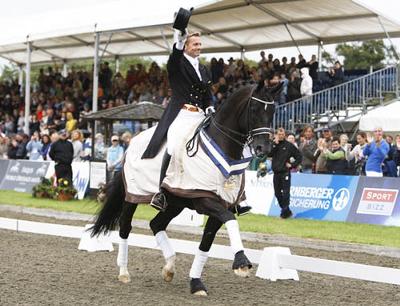 A WDM Rider Ranking award of €25,000 (US$37,000) is also offered by Nürnberger Versicherungsgruppe at WDM in Munich in 2010. Munich will also be the venue for a WDM gala celebration.

The 2010 schedule of confirmed competitions of the Exquis World Dressage Masters, founded by Exquis and also sponsored by Moorland Stables and Moorland Investments and Nürnberger Versicherungsgruppe, is:

Mark Bellissimo, Chief Executive of Equestrian Sport Productions, organizer of the Palm Beach WDM, said: “We look forward to WDM returning in 2010 to even greater success than we enjoyed at the 2009 inaugural event here in Palm Beach. We are prepared to welcome fans from across the Americas and around the world to the finest dressage competition at one of the most beautiful lifestyle destinations.”

Dr. Erich Herrgen, president of Pferd International at Munich, said: “We are excited to have the World Dressage Masters return to this historic Olympic stadium in 2010. The investment in new competition arenas and other facilities for such a prestigious event was appreciated by the large crowds in 2009 and we are working to make it even better in 2010.”

Dane Rawlins, founder of Dressage at Hickstead, said: “We have no doubt that the 2010 WDM will exceed the tremendous success we enjoyed at the 2009 competition. The top horses and riders from both sides of the Atlantic created an event with a very special atmosphere that is now ranked among the top three dressage shows in the world.”

Anthony M. Kies, founder of Exquis World Dressage Masters, said: “The World Dressage Masters in 2010 promises to raise the sport to even higher levels of quality and participation in Europe and North America. We could not be happier that Exquis and our partners and sponsors have achieved so much in such a short time. The future is, indeed, very bright.”

Kees Visser, whose Moorland Stables and Moorland Investments is a major sponsor, said: “As sponsor, we are pleased that within one year of starting the WDM the fixtures are already highlights among the dressage community. The formula has produced world records and brings in the best riders in the world such as Isabell Werth and Anky van Grunsven, both gold medalist of the last Olympics, and Edward Gal, European Champion in team and freestyle.”

The 2010 WDM events have all been designated with the highest rating of CDI5* by the International Equestrian Federation (FEI).

All three venues hosted an Exquis World Dressage Masters in its inaugural year in 2009.

The City of Cannes, on the French Riviera, was also among the 2009 shows. As the date in 2010 places it amidst the national championships in both The Netherlands and Germany, participation in 2010 is being reviewed.

Discussions are also being held with organizers of other premier horse shows to host a World Dressage Masters event next year.

Each competition consists of a Grand Prix with prize money of €10,000 (US$14,980) of up to 20 riders from the top of the FEI Rider Rankings List, qualifying through a CDI3* or by special invitation.

Moorland Stables and Moorland Investments of The Netherlands, headed up by Tosca and Kees Visser and owners of Moorlands Totilas, were founding sponsors.

The Rider Rankings award takes into account the results of Cannes and Hickstead in 2009 and Palm Beach and Munich in 2010. The Munich Final promises extra excitement as double points are offered for the award. Prior to the final, Munich will present a gala celebration.

In 2009, nine of the world’s top 10 riders and horses competed in at least one Exquis World Dressage Masters.

Note: In the case of tied points, the best individual result in Grand Prix will be decisive

Photo: Moorlands Totilas ridden by Edward Gal in the victory gallop at Exquis World Dressage Masters in Hickstead, England in 2009. The result placed Gal at the top of the Nürnberger WDM Rider Rankings going into 2010. © 2009 Ken Braddick/dressage-news.com

WDM utilizes marketing strategies and innovation to enhance the sport of dressage worldwide.

WDM is sponsored by Exquis, Moorland Stables and Moorland Investments and Nürnberger Versicherungsgruppe.