What is Equine Sweet Itch and how can you spot the symptoms, prevent it or treat it.

The fly most commonly involved is Culicoides pulicaris midge and although most horses and ponies are bitten by this midge, they show no major signs or reaction to it.

However, horses that suffer from sweet itch develop an allergy to the bites.

Sweet Itch, or Summer Seasonal Recurrent Dermatitis (SSRD), is a problem that affects thousands of horses, ponies and donkeys in many countries.

Almost all horse breeds and types of ponies can be affected, from tiny Shetland ponies to heavyweight draught horses, although the condition is rare in English Thoroughbreds.

In South Australia reports say that as many as 60% of horses and ponies are affected. About 5% of the UK horse population are thought to suffer.

Exudative dermatitis , ie; weeping sores, sometimes with a yellow crust of dried serum, can occur. If sores are not attended to properly a secondary infection can result.

The top of the tail and the mane are most commonly affected by sweet itch.

The neck, withers, hips, ears and forehead, and in more severe cases, the mid-line of the belly, the saddle area, the sides of the head, the sheath or udder and the legs.

There can be a marked change in temperament resulting in lethargy with frequent yawning and a general lack of spark, or your horse may become agitated, impatient and lack concentration when ridden.

Your horse will become very agitated when flying insects are around and may start head shaking repeatedly.

Diagnosis is not usually difficult as the symptoms and the seasonal nature (spring, summer and autumn) are strong indicators.

However symptoms can persist well into the winter months, with severely affected horses hardly having any respite before the midge starts its onslaught again the following spring. 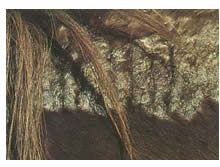 Horses that go on to develop equine sweet itch usually show signs of the disease between the ages of one and five and it is common for the symptoms to appear first in the autumn.

Sweet itch is most commonly seen in animals from 4 to 6 years of age as the allergy requires repeated exposure to fly bites to develop, this usually takes 2 to 4 summers.

The signs of sweet itch can get worse as the animal gets older.

There is evidence that stress caused by moving to a new home, sickness, or severe injury, can be a factor when mature animals develop Sweet Itch.

Environmental factors play a major part and where the horse is born and it lives as an adult are at least as significant as the bloodlines of its sire and dam.

Sweet Itch is not contagious …

Although if conditions are particularly favourable for a high Culicoides midge population, more than one horse in the field may show symptoms.

The Culicoides pulicaris midge tends to stay near its breeding grounds, which are wet areas ponds ditches, etc; and it is most numerous when the weather is warm.

The Culicoides midges appear to be present more in the afternoon and through the warm evenings. 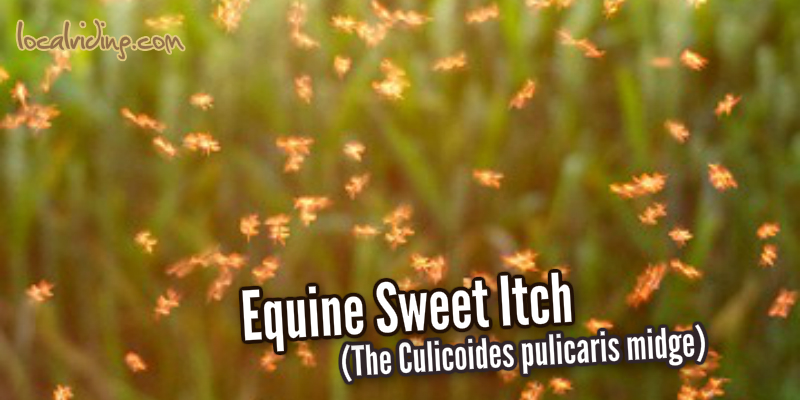 In the UK Sweet Itch is classed by Vets as a reportable condition, which must be disclosed by an owner to a prospective purchaser before the sale. A vet diagnosing the allergy may regard the condition as serious and specify your horse as unsound because of it.
[userpro template=card user=author]