The sport of equestrian eventing is a ridden sport which combines Dressage, Cross-Country and Showjumping. 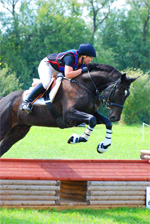 The three lowest eventing levels are:- Intro; Pre-Novice and Novice. The lower levels require no qualifications and subject to the age of the
rider and the height of the horse, you only have to be a member of british eventing or hold a british eventing day ticket to enter.

Beyond this, you need a certain number of clear rounds at each level before you can move up to the next level.

You can enter a british eventing competiton on a day ticket if you don’t want to commit to full membership. A sort of try before you buy scheme. There are also training day tickets available.

The equestrian eventing dressage test was designed to demonstrate that military horses are supple and obedient and suitable for use at parades ..

The showjumping phase is traditionally the final phase in equestrian eventing, and is set up to test the athleticism of the horse …

The Olympic Games take place every four years in a bissextile year.

The Games of the XXVIII Olympiad took place in Athens, Greece in 2004. It was the first time that the format without steeple chase was used. The 2008 Olympics where held in Beijing, China and the 2012 Olympics will be held in London, England.

The FEI World Equestrian Games (WEG) are held every four years in the even years between the Olympic Games.

The last edition of the WEG was organised in Aachen, Germany in 2006. Preparations for the next WEG are well under way and it is to be held outside Europe for the first time, in Kentucky, USA in 2010.

The FEI Eventing World Cup is a linked series for individuals, the goal of which is to develop the sport throughout the world.

In the U.K. the governing body is British Eventing (BE). The USA body is known as the United States Eventing Association (USEA).

Other national equestrian eventing organisations include: