Dressage Rider Courtney King is based at Sunnyfield Farm in Bedford, New York.

The above video features Courtney King riding Harmony’s Mythilus in the Grand Prix Freestyle at the 2008 Collecting Gaits Farm/USEF Dressage Festival of Champions, where they scored 78.05% 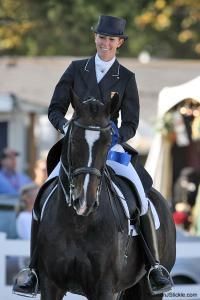 Courtney is a 2004 graduate of Columbia University in New York and holds a Bachelor of Arts Degree in Literature.

She has been riding horses since she was nine years old.

At 15, she became a working student for two-time Olympian Lendon Gray and she competed in the 1998 North American Young Riders Championships.

In April 2007 Courtney King and Idocus represented the USA for the first time at the World Cup in Las Vegas.

The pair finished in 6th place competing against 30 of the best riders in the world.

In April 2008, Courtney King and Idocus qualified and competed in the World Cup in The Netherlands.

In August 2008, she represented the USA at the Olympic Games in Hong Kong on Harmony’s Mythilus