Don Schufro ridden by Andreas Helgestrand has won multiple Grand Prix titles throughout Europe including the 2006 CDI in Bremen and the 2006 World Cup qualifier in Vilhelmsborg.

The superb pairing of Andreas Helgstrand and Don Schufro helped the Danish Dressage Team secure their first ever Olympic Team medal at the 2008 Olympic Games held in Beijing, China.

He is a Dark Chestnut and stands 17.0hh. He is registered with the Oldenburg Studbook and Grade Approved Oldenburg, Hanover, Westfalia, KWPN and Denmark.

Top Dressage Horse Don Schufro is rated as one of the best young dressage stallions in the world today.

He is the most beautifully bred stallion of the modern performance type, being bred from the very successful crossing of Donnerhall and Pik Bube. 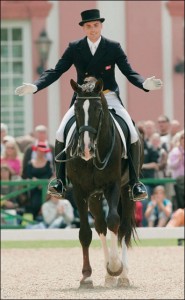 Don Schufro possesses the true uphill conformation required for top level dressage competition, together with tremendous power, which allows him to perform movements with ease and grace.

Don Schufro is by the outstanding stallion Donnerhall, who combined a sports career at international Grand Prix level with a remarkable breeding performance.

Donnerhall is the sire of 62 graded sons including Don Primero. He is Grading and Federal Champion in Germany and the sire of top dressage horses, including Don Gregory, (sire of the very promising young dressage stallion Don Davidoff, bought for £250,000 in Germany), and Dream of Glory to name but two.

Donnerhall’s progeny have won over £212,000 and his breeding index for dressage is a record-breaking 165. He himself is by the great International Grand Prix dressage stallion Donnerwetter, behind so many of our top dressage competition horses of today.

Don Schufro’s dam Fiesta, (also the dam of Fantastica full sister to Don Schufro and dam of the young dressage stallion Sunny Boy), is by the great Pik Bube source of the correct dressage movements so sought after today.

Don Schufro is the sire of many top dressage horses including 30 graded stallions of which the international competitors Pikant, Plaisir d’Amour and Pik Primaire are some of the most successful.

In his performance testing Don Schufro achieved an index of 150 for dressage and was reserve champion overall with a mark of 133.36.

He had several placings at shows in Neumenster, Bremen, Lingen, CHIO in Aachen and at the German Dressage Masters in Stuttgart.