When to use a double bridle for dressage riding …

There are strong rules governing the bridles and bits used in dressage competitions, including double bridles, so there is little choice available.

Mainly because your horse should be balanced and attentive in a snaffle before a double bridle is even contemplated.

The double bridle is not compulsory at any level in British Dressage.

With a double bridle a fixed cheek, hollow mouth German Weymouth is traditional and this should be used with an eggbutt bridoon. 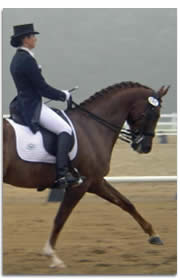 Until recently dressage rules dictated that the mouthpiece must be made of the same metal throughout.

But the 2005 British Dressage Rules state that mixed metals are now allowed.

Whether this means mixed alloys such as Aurigan and Kangaroo, or that sweet iron and copper insets are now allowed is unclear.

Rubber covered and vulcanite mouthpieces are allowed on the curb bit.