In horse riding confidence problems are particularly difficult to overcome

Particularly when you have suffered a nasty fall or are recovering from an accident that happened while riding out. 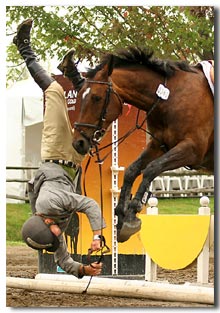 Hopefully Amanda’s story will help other riders to stick with it.

With luck it will show you how wonderful a good relationship with your horsey friend can be and how your horse can help you with your confidence problems.

I would like to write to tell you my story in hope it will help other folks with confidence problems.

My history is, this year I am 30 years old. I have been riding and have owned my own ponies since the age of 9 years. I have been very lucky as my parents could afford to buy me a pony when I was 10 years old. He was old, but I thought he was the best pony in the world. He would never be placed in the show ring but he taught me so much.

I like always to ask why, what, how, never to assume, ask nicely and he would try to leap the moon, tell him how and I hit the floor. I did everything with my new found friend and could not understand why my other friends treated theirs as machines.

I eventually outgrew him and passed him on to a riding school where he lived out his days happily telling children how to ride. I progressed onto a 15hh fiery Welsh cob X TB ( who is still with me 18 years down the line). We would jump anything, do anything.

I worked, as most horsey folk do on various riding establishments and when teaching, could never understand why folk could be afraid of such amazing creatures, although I never said this at the time, I tried to be patient with them and encourage them to try harder.

On Friday, August 6th 1999 my life was dramatically changed.

It was the last day at a yard I was working on as I wished to go back to teaching riding.

Myself and another groom took an experienced horse and a baby horse out hacking around country lanes. I was on the baby.

On one bend, a 7.5ton truck flew around the corner. Luckily, the baby I was riding had a grass verge to panic on. Later that day when the same truck came past us on the same lane but in the other direction, I was not so lucky.

This time I was riding my favourite horse, an experienced, ‘nothing phases me’ event horse and the other groom was on a baby horse. I heard the truck approaching and signalled him to slow down. He didn’t.

He hit the horse at 40 MPH while talking on his mobile phone, leaving us with a gap of 2 feet between him and a stone wall.

The truck hit the horses hip, dragging him under the truck. It spun us around with my right leg and hip under the horse and the truck on top. The impact spun us 180 degrees and crumpled my head and neck up against the wall, smashing my new hat and not my head. The truck finally stopped further down the road. All I can remember is watching the horse try to get up and run away.

He collapsed around a corner and was later shot. Luckily I had 3 witnesses, but still the driver was not prosecuted. I miraculously did not break anything. The doctors X-rayed me twice as they could not believe it.

It took nearly 2 years before I could sit a horse without screaming in pain.

My 3 ponies became my life support and my determination to get over it.

A few years earlier, I had begun to ride western with my pony and fiery welsh cob X TB. This is basically a classical way of going that is long and low, but with the horse still working correctly.

My fiery horse would stand patiently by a stone wall with no tack or head collar on and let me try to sit on him.

He put up with the screams, sobbing and temper tantrums by simply turning his head and ‘hugging’ me better.

The first and last time on the road, a truck approached. I screamed and had a panic attack, curling into a ball on his back. He sighed, pulled the reins out of my hands and slowly turned and took me home.

These days, when he wants to come out of retirement for a play, he is the only horse I will do absolutely anything on.

Before the accident I bought a cob foal. He is now 8 years old.

Because of the accident and me being unable to ride, he was broken to western by a friend as a nearly 6 year old. Like any baby, he lacks confidence and experience. It took me a year after he was started in work to sit on his back for 30 seconds. He had no work after the 3 weeks of training. He did not understand why I was afraid.

Sell him everyone said. He is too big, strong, green, naughty, stubborn for you to cope with now.

I am glad I chose to ignore them, We are now developing a strong ridden relationship that is echoing what we have on the ground. I ride him for 20 minutes once a week. I cannot manage longer as the pain gets too much.

With the meagre amount of compensation (that was meant for changes in the house to help) I had an arena made. I can walk, trot and canter.

The other day I rode out of the arena for around 100 yards and back to the yard. It has been a long time coming, I still have panic attacks while riding him but we are coping.

We can do a lovely shoulder-in, leg yield and side pass (western). We have a long way to go yet and I hope by next year I can ride him around the fields near me instead of leading him for a change of scenery.

It takes time. We are going by the long scenic route. We even went to a couple of dressage events. I do not know who got the worst stage fright, me or Elliott. Still we went in the arena. We achieved lots that day.

We joined the CRC earlier this year and decided to put on some clinics in my area. Tony Dampier gave a clinic and then judged the tests later. Everyone enjoyed the day. Me and Elliott even came 3rd in the beginners; even though we both panicked. A huge thanks to Tony for his knowledge and experience. From his lessons we are both becoming more confident in each other.

From all the treatment I have had and still am having for my injuries, I decided sports massage and it’s associated components worked well for me.

I found a place offering training in this area and have since attained my Level two qualification and am well on the way to the advanced level. 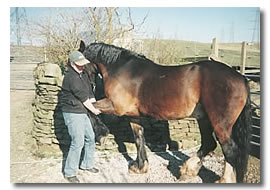 I feel through this type of therapy I can give something back to the horse.

I have since set up my own business, A.R. Equine Therapy and get much pleasure from helping horses back to work or play from injury, trauma or illness.

So what am I trying to say about confidence problems?

I once read an old cowboy saying; ‘My horse is my partner, my brother, my companion’ and that’s how I now look at my amazing ponies and feel I am privileged to know them and have their trust and companionship.Amanda

Firstly, if someone puts you down for not being brave, it is usually them who are the cowards for being so narrow minded.

Secondly, through western and the CRC, I can ride and have a channel to push my lack of confidence away. If I can get back on my feet with the help of these amazing animals and manage to sit on Elliott at an event, never mind get placed! Anyone can achieve a friendship, partnership, harmony, call it what you will, with your horse.

It’s not the winning that matters. It’s the taking part, the look at us, we can work together happily.

I now laugh at those who look down on me and my hairy cobs. I am not the one lacking. It is them, who only see a machine to get trophies, not a relationship with a friend.