The Cleveland Bay was once called the Yorkshire Coach Horse and crossed with a Thoroughbred the breed produces fine upstanding heavyweight hunters, excellent carriage horses and some first rate show jumpers.

Did You Know; The survival of the Cleveland Bay was aided in no small measure by Queen Elizabeth II.

A colt named Mulgrave Supreme, due to be sent to the United States, was bought by the Queen and subsequently broken to saddle and to harness and then made available to breeders of Cleveland Bays, both pure and part bred, throughout Britain. 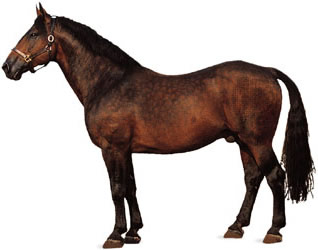 Height: From 16 to 16.2hh. Height does not disqualify an otherwise good animal

Origins of the Cleveland Bay

The Cleveland Bay is probably the oldest British breed, developed from a packhorse known as the Chapman horse.

In the 17th century, Andalusian and Barb blood was introduced to produce a fine carriage horse – named the Cleveland Bay.

Motorized transport saw the breed decline, but when crossed with the thoroughbred, the breed produces excellent heavyweight hunters and carriage horses.