Classical Dressage riding evolved from military training and complex cavalry movements that trained the horse and rider for the battlefield.

Classical dressage riding is the art of riding with the horse and rider in perfect harmony.

The rider working with, rather than against the movements of the horse.

Correct classical riding only ever occurs when ;

The History of Classical Dressage : 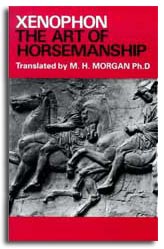 The first work written on what is considered to be classical dressage was by Xenophon – The Art Of Horsemanship. On the Art of Horsemanship, comes to us from 360 BC the work of the Athenian cavalryman Xenophon.

It is the oldest known text on horseback riding still in existence, and the first work known to emphasize training techniques that account for the state of the horse’s psyche as well as his body.

On the Art of Horsemanship is divided into eleven chapters, and deals with the purchase, care and training of horses.

It also deals, to some extent, with the duties of the groom, the construction of stables and the equipment needed for several aspects of horsemanship.

By the time Xenophon wrote his book, the riding horse was highly developed in its training, usually with many years spent perfecting an ideal mount.

Military horses were trained for a number of airs or schools above the ground. Movements that enabled their riders to escape from battle when surrounded, or to fight more easily.

Acquiring the classical seat – Classical riding is primarily concerned with the acquisition of a classical seat. A balanced, deep and feeling seat.

The training included movements such as levade, capriole, courbette, ballotade and other dressage movements still seen today; such as piaffe, passage, and half-pass.

Early European aristocrats displayed their horses’ training in equestrian pageants, but in modern dressage competition successful training is demonstrated through the performance of a dressage test.

A dressage test is a prescribed series of movements within a standard size dressage arena.

A dressage judge or judges in top level classes, evaluate each dressage movement on the basis of an objective standard appropriate to the level of the test and assign each movement a score from zero to ten – zero being "not executed" and 10 being "excellent."

A score of 9 (or "very good") is considered a particularly high mark.

The only remaining schools of classical dressage are the Spanish Riding School in Vienna, and the French school or Cadre Noir in Saumur, France.

However, there are a number of classical dressage trainers who try to keep the art alive.