Team Chasing – You Just do it …

Team Chasing is a sport in which a team of four have to go as fast as they can across country over large natural fences. It is half-way between eventing and point-to-pointing.

So horses need intelligence, control, balance and jumping ability. The horse ideally needs the talents of an eventer combined with the stamina and speed of a point-to-pointer. It is necessarily a dangerous sport. 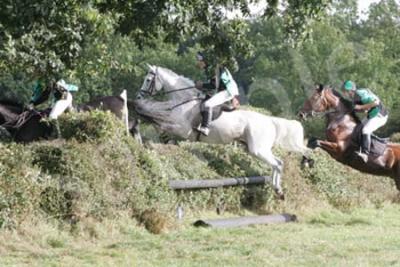 I lead ride on my 17.0hh Belgium warmblood mare who is a Rolls Royce of a ride and has never put a foot wrong in the five years that I have chased her. I also have a great team behind me and as a result of which we were sitting at the top of the National League.

At the Grafton Open Team Chase, we were one of the last teams to go and four fences from home we could hear from the commentary that we were well up on the clock.

As I was coming up to a large hedge the second horse came past me – he is a faster horse and was trying to make up time. As he took off Maggie took off as well. She was a full stride away from the fence and ended up coming down on top of the fence and somersaulting over.

I was fired out of the front door like a human cannonball and landed square on my head.

Maggie landed on top of me and as she rolled her body over me she caused a forced flexion injury of my neck. I felt all the bones in the back of my neck break like a line of dominoes and this was accompanied by intense pins and needles and tingling all down my shoulders and arms.

It is interesting the feelings that accompanied this. There was certainly no panic distress or self-pity.

My first thought was ‘what a silly way to die’, closely followed by ‘the girls are going to be so cross with me‘.

I also thought of my dear friend Dr Keith Eaton whose dying words were ‘This is going to be a very interesting experience for a scientist.’

I knew my neck was broken and just assumed that death or paralysis would follow shortly. However I remained conscious.

Although I couldn’t see anything because my face was mashed into the ground, I could hear all that was going on and what I couldn’t understand was why Maggie couldn’t get up. Then the thought occurred to me that she too had broken her neck i.e. a double disaster.

This really was the low point of the day! Unbeknown to me somebody was sitting on Maggie’s head to try to stop her thrashing around on top of me and when he jumped off Maggie too got up. Clever old mare managed to do this without kicking me and she trotted off happily to her stable mate Red. Maggie was completely fine!

Within a minute or two of Maggie getting up the pins and needles in my shoulders and neck miraculously disappeared as fast as they had come and I suddenly realised that I had feeling and movement in my hands and feet.

I should be able to say that this was accompanied by a wave of relief, but this would not be true. Since I hadn’t been in panic mode in the first place I seemed to take a rather disinterested view which amounted to ‘Jolly good, perhaps I’m not paralysed after all’.

From being a complete rag doll on the ground unable to move I was able to grab my head and roll over to communicate to the paramedics that the neck was broken so that appropriate action could be taken.

CT scan done at Banbury Hospital showed multiple fractures of all vertebrae between C2 and T1 inclusive together with fractured ribs and scapula, together with associated soft tissue damage.

Essentially the forced flexion injury pulled out and/or broke off the cervical spinous processes just like tent pegs.

An old spinal fracture was also found – but I have no idea when I broke my back last time!

The other really interesting injury which I didn’t notice until I tried to read a book were holes in my visual field.

When Maggie landed on top of me this created a pressure wave which shot up the arteries and they ruptured at the back of both eyes. So I have flame haemorrhages in both retinae which are causing holes in my visual field. With time and arnica these should settle.

I also had the most magnificent black eye and even now, a week later, my left eye is completely purple!

So for the first time in my life I have had a week off work because of ill health. Normal service resumes on Monday and no pity please – an entirely self inflicted injury!

It’s been like Christmas here with all the lovely cards received! I now feel so much better I feel a complete fraud. Back on the pointer and went for a lovely bomb today.

Hunting on Sat. Work as normal.