The Burns an’ a’ that! Festival

Ayrshire attractions like the Burns festival run throughout Ayrshire in May and June to celebrate the life of the bard. Main events include a Gala Concert at Culzean Castle and the Holy Fair at Mauchline whilst numerous fringe events offer a wide range of entertainment.

The two day Coral Scottish Grand National Festival, held on Friday April 18 and Saturday April 19, is Scotland’s richest jumps meeting with more than £500,000 in prize money and £200,000 alone on offer for the National itself.

Crowds of more than 20,000 will descend on Ayr over the two days and the big race itself attracted more than 900,000 viewers when screened live on Channel 4 in 2007. For more information or to book tickets in advance, visit the Ayr Racecourse website Ayr Racecourse

Often referred to as ‘Scotland in Miniature’, the Isle of Arran captures many aspects of the beauty of Scotland. From towering granite peaks inviting hill walkers and climbers to peaceful sandy bays overlooked by palm trees growing in the warm climate of The Gulf Stream.

The wildlife is outstanding, with deer, pheasant, otter and eagle readily seen in the mountains. There are over 100 species of birds. There are colonies of seals near coastal caves, trails and pathways to mysterious Bronze Age Stone Circles, and many relaxing angling hours to be enjoyed by streams or sea. 7 challenging golf courses tempt the golfer, whilst history and heritage is catered for at Brodick Castle and various museums

Arran is the largest island in the Firth of Clyde (430 km²). It is in the unitary council area of North Ayrshire. In the 2001 census it had a resident population of 5,058. 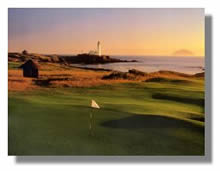 Often referred to as Scotlands Pebble Beach; Ayrshire attractions like Turnberry Ailsa on the west coast of Scotland is described as perhaps the most scenic Open Championship course in the world.

Many regard it as the best course in Scotland, after St Andrews Old Course, and among the top ten in the world.

Turnberry provides a complete golfing experience with an excellent layout, magnificent scenery and plenty of history. It is part of the Westin Turnberry Resort and hugs the coast along Turnberry Bay. 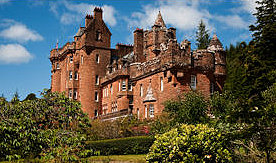 Off the west coast of Ayrshire on the Isle of Arran among the forests at the foot of Goatfell Mountain, stands a magnificent red sandstone castle.
This is Brodick Castle, the ancient seat of the Dukes of Hamilton. The name Brodick means ‘broad bay’ in Norse. 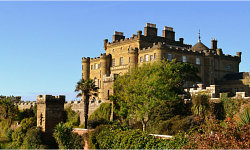 The top floor apartment of Culzean Castle was presented to General Eisenhower in 1945, for his lifetime, in recognition of his role during World War II. A thank you from the Scottish people. Today that apartment is rented to paying guests by the National Trust for Scotland who received the castle from the 5th Marquess of Ailsa and the Kennedy family in 1945.

Loudoun Castle stands about a mile from Galston. It was the ancestral home of the Campbell family of Loudoun. The earliest four storey square tower with a battlement, probably built by the Craufurds, incorporated into the present ruins dates to either the 12th or 13th century. In 1601, the First Earl of Loudoun, Sir John Campbell, Chancellor of Scotland, erected additional buildings to the south of the old keep which were included in the later rebuilding.

The Tam O Shanter Experience in Alloway has a large car park, licensed restaurant, gift shop and laser disc technology and theatrical affects that bring Burns best loved tale of Tam O Shanter to life. Opening times 09.30 – 17.30 April – October and 10.00 – 17.00 November – March. An admission charge to the theatre is about £1.50 adults / 75p children. A one-pound token can be purchased from the centre to allow access to the gardens containing the Burns Monument. For more information, visit the website www.burnsheritagepark.com.

Loudoun Castle Family Theme Park opens 3rd April and runs to 29th September. The park is open every day from 10.00 – 17.00 from 19th May – 31st August and at weekends thereafter. For more information on the park, concession and family prices, visit the website at www.loudouncastle.co.uk. Loudoun Castle is situated 5 miles northeast of Kilmarnock next to the town of Galston.