The Appaloosa Horse Breed is known for its spotted coat.

It is now one of America’s foremost breeds and is found in many countries around the world.

The Origins of the Appaloosa Horse Breed

The Appaloosa was originally bred by the Nez Perc? Indians and Arabian bloodlines were introduced in the late 19th century.

According to the Appaloosa Horse Club of Canada, the modern day Appaloosa is considered a light horse with a height between 14.2 and 15.2 hands at the withers.

The typical Appaloosa has a dark coat with white dappling on its rump, but coat patterns vary.

The Leopard Appaloosa, for example, is the Dalmatian of the horse world with a pale body covered in black spots.

White settlers are said to have coined the horse’s name. They first saw the spotted horses among the tribes along the Palouse River, and so, the horse was christened Appaloosa. 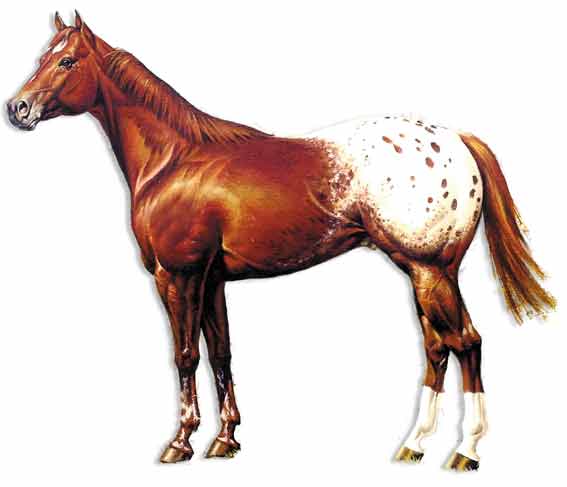 Physical Attributes of the Appaloosa

The breed has six distinct patterns of spots, but no two horses are exactly the same.

The Appaloosa horse breed origins date back to the time of the North American Native Indians who received their first horses from Spanish explorers.

Not only did they quickly learn to use the horse to its full advantage, but they also practiced selective breeding.

The Appaloosa was the result of the Nez Perce search for a quality horse full of versatility, endurance and solid temperament.

Unfortunately by the late 1800s Native Americans were being forced from their land by the US government.

The Nez Perce, like many other tribes, were forced onto reservations and encouraged to take up agricultural pursuits. In keeping with their desire to contain the Native Americans, the US government undertook a program to destroy their horses.

Many Appaloosas were rounded up and sold or simply shot. Their distinct bloodlines became blurred and they were on the edge of extinction before the Appaloosa Horse Club was formed in the late 1930s. Thanks to the Appaloosa Horse Club and a selective breeding program, the characteristic mottled skin and striped hooves (which add to their durability) have now resurfaced.

The endurance and courage of the Appaloosa horse breed, have added to the horse’s popularity over the years.

The horse is used across several equestrian disciplines but is heavily concentrated in the open frontiers of the western United States and Canada. Certain Appaloosa bloodlines are renown for their cattle cutting abilities, while others are bred for dressage trials. Appaloosa horse shows typically have Native dress classes for men and women where spectators see both horse and rider in full Native American regalia.

The endurance of the Appaloosa horses took the Nez Perce within one day’s ride of the Canadian border before Chief Joseph was forced to surrender.

However, todays Native Americans, particularly those closely linked with the Nez Perce, have begun to breed a purer Native American horse, one that will bring out the best Appaloosa traits, so often desired by their ancestors.